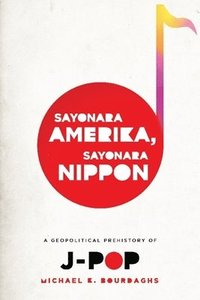 A Geopolitical Prehistory of J-Pop

av Michael Bourdaghs
Inbunden Engelska, 2012-02-21
789
Köp
Spara som favorit
Skickas inom 7-10 vardagar.
Fri frakt inom Sverige för privatpersoner.
Finns även som
Visa alla 2 format & utgåvor
From the beginning of the American Occupation in 1945 to the post-bubble period of the early 1990s, popular music provided Japanese listeners with a much-needed release, channeling their desires, fears, and frustrations into a pleasurable and fluid art. Pop music allowed Japanese artists and audiences to assume various identities, reflecting the country's uncomfortable position under American hegemony and its uncertainty within ever-shifting geopolitical realities. In the first English-language study of this phenomenon, Michael K. Bourdaghs considers genres as diverse as boogie-woogie, rockabilly, enka, 1960s rock and roll, 1970s new music, folk, and techno-pop. Reading these forms and their cultural import through music, literary, and cultural theory, he introduces readers to the sensual moods and meanings of modern Japan. As he unpacks the complexities of popular music production and consumption, Bourdaghs interprets Japan as it worked through (or tried to forget) its imperial past. These efforts grew even murkier as Japanese pop migrated to the nation's former colonies. In postwar Japan, pop music both accelerated and protested the commodification of everyday life, challenged and reproduced gender hierarchies, and insisted on the uniqueness of a national culture, even as it participated in an increasingly integrated global marketplace. Each chapter in Sayonara Amerika, Sayonara Nippon examines a single genre through a particular theoretical lens: the relation of music to liberation; the influence of cultural mapping on musical appreciation; the role of translation in transmitting musical genres around the globe; the place of noise in music and its relation to historical change; the tenuous connection between ideologies of authenticity and imitation; the link between commercial success and artistic integrity; and the function of melodrama. Bourdaghs concludes with a look at recent Japanese pop music culture.
Visa hela texten

Michael K. Bourdaghs's compellingly readable Sayonara Amerika, Sayonara Nippon imaginatively conceives an original account of how Japan, in the postwar and Cold War years, broke with a historical narrative centered on the United States military occupation and Japan's subsequent confinement within the American imperium to enter the actual world. Bourdaghs persuasively shows how Japan, through the production of diverse forms of popular music and the formation of its audiences, engaged a genuinely global geopolitical aesthetics, shaping it and being shaped by it, that successfully left behind the narrow precinct of America's Japan for the new world announced by J-Pop. -- Harry Harootunian, Duke University, author of Overcome by Modernity: History, Culture, and Community in Interwar Japan For music, history, or cultural fans of contemporary Japan, this book is a chart-topper. -- Kris Kosaka Japan Times It is truly encouraging to see this Asian specialist presenting an excellent study of a subject so often mishandled in poorly researched journal articles. Bravo! Highly recommended. Choice A well-researched account of the rise of Japanese popular music in the post-war period and is recommended for anyone who has an interest in music as a form of cultural production. -- Eric Abbey Popular Music and Society

Michael K. Bourdaghs is associate professor of modern Japanese literature at the University of Chicago. He is the author of The Dawn That Never Comes: Shimazaki Toson and Japanese Nationalism and a translation editor of Natsume Soseki's Theory of Literature and Other Critical Writings and Kamei Hideo's Transformations of Sensibility: The Phenomenology of Meiji Literature.

Acknowledgments A Note on Names and the Translation Introduction 1. The Music Will Set You Free: Kurosawa Akira, Kasagi Shizuko, and the Road to Freedom in Occupied Japan 2. Mapping Misora Hibari: Where Have All the Asians Gone? 3. Mystery Plane: Sakamoto Kyu and the Translations of Rockabilly 4. Working Within the System: Group Sounds and the Commercial and Revolutionary Potential of Noise 5. New Music and the Negation of the Negation: Happy End, Arai Yumi, and Yellow Magic Orchestra' 6. The Japan That Can "Say Yes": Bubblegum Music in a Postbubble Economy Coda Notes Index