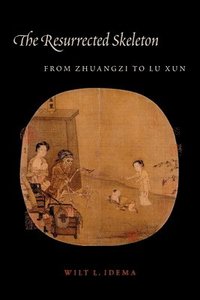 From Zhuangzi to Lu Xun

av Wilt Idema
Inbunden Engelska, 2014-07-08
539
Köp
Spara som favorit
Skickas inom 7-10 vardagar.
Gratis frakt inom Sverige över 159 kr för privatpersoner.
Finns även som
Visa alla 1 format & utgåvor
The early Chinese text Master Zhuang (Zhuangzi) is well known for its relativistic philosophy and colorful anecdotes. In the work, Zhuang Zhou ca. 300 B.C.E.) dreams that he is a butterfly and wonders, upon awaking, if he in fact dreamed that he was a butterfly or if the butterfly is now dreaming that it is Zhuang Zhou. The text also recounts Master Zhuang's encounter with a skull, which praises the pleasures of death over the toil of living. This anecdote became popular with Chinese poets of the second and third century C.E. and found renewed significance with the founders of Quanzhen Daoism in the twelfth century. The Quanzhen masters transformed the skull into a skeleton and treated the object as a metonym for death and a symbol of the refusal of enlightenment. Later preachers made further revisions, adding Master Zhuang's resurrection of the skeleton, a series of accusations made by the skeleton against the philosopher, and the enlightenment of the magistrate who judges their case. The legend of the skeleton was widely popular throughout the Ming dynasty (1368-1644), and the fiction writer Lu Xun (1881-1936) reimagined it in the modern era. The first book in English to trace the development of the legend and its relationship to centuries of change in Chinese philosophy and culture, The Resurrected Skeleton translates and contextualizes the story's major adaptations and draws parallels with the Muslim legend of Jesus's encounter with a skull and the European tradition of the Dance of Death. Translated works include versions of the legend in the form of popular ballads and plays, together with Lu Xun's short story of the 1930s, underlining the continuity between traditional and modern Chinese culture.
Visa hela texten

Idema is the master translator of Chinese popular and religious culture. Here he offers the first English-language translations of enchanting texts, both famous and rare, around one classic story: Zhuangzi's encounter with a skeleton. The anthology speaks both to universal concerns and to Chinese literature's unique way of blending religion, philosophy, poetry, and farce. -- Vincent Goossaert, coauthor of The Religious Question in Modern China Master Zhuang's encounter with a skull, macabre though it may innately seem, is possessed of the peculiarly wry and mordant humor of the author of the eponymous volume also known as Wandering on the Way. This short, piquant tale spawned a host of adaptations and variations in a wide variety of genres, from rhapsodies to dramas, from ballad stories to precious scrolls, and many others beside. Idema gathers a generous selection of texts on this grim theme that has persisted in the Chinese literary tradition for more than two thousand years and provides them with expert translations that are sure to leave readers both chilled and thrilled. -- Victor H. Mair, coeditor of The Columbia Anthology of Chinese Folk and Popular Literature A masterful set of translations... Idema has presented future researchers, not only in Chinese and Daoist studies but also in comparative literature, religious studies, and cultural studies generally, with a wonderful collection of resources for investigation and interpretation. -- Jeffrey L. Richey H-Asia [The Resurrected Skeleton: From Zhuangzi to Lu Xun] offers for students and scholars alike an accessible and fresh avenue to a portion of the Zhuangzi's multi-faceted reception history that has not been available in English to this day. Journal of Chinese Religion

Wilt L. Idema is Research Professor of Chinese Literature at Harvard University. He has published widely on traditional Chinese vernacular fiction and drama and is fascinated by works at the intersection of literature and religion. In recent years, he has published a number of anthologies of plays and ballads concerning traditional Chinese legends and folktales. These books include "The Orphan of Zhao" and Other Yuan Plays: The Earliest Known Versions (with Stephen H. West); Judge Bao and the Rule of Law: Eight Ballad-Stories from the Period 1250-1450; Meng Jiangnu Brings Down the Great Wall: Ten Versions of a Chinese Legend; and Escape from Blood Pond Hell: The Tales of Mulian and Woman Huang (with Beata Grant).