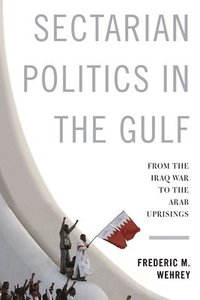 Sectarian Politics in the Gulf

From the Iraq War to the Arab Uprisings

av Frederic M Wehrey
Häftad Engelska, 2016-10-25
429
Köp
Spara som favorit
Skickas inom 7-10 vardagar.
Fri frakt inom Sverige för privatpersoner.
Finns även som
Visa alla 2 format & utgåvor
One of Foreign Policy's Best Five Books of 2013, chosen by Marc Lynch of The Middle East Channel Beginning with the 2003 invasion of Iraq and concluding with the aftermath of the 2011 Arab uprisings, Frederic M. Wehrey investigates the roots of the Shi'a-Sunni divide now dominating the Persian Gulf's political landscape. Focusing on three Gulf states affected most by sectarian tensions-Bahrain, Saudi Arabia, and Kuwait-Wehrey identifies the factors that have exacerbated or tempered sectarianism, including domestic political institutions, the media, clerical establishments, and the contagion effect of external regional events, such as the Iraq war, the 2006 Lebanon conflict, the Arab uprisings, and Syria's civil war. In addition to his analysis, Wehrey builds a historical narrative of Shi'a activism in the Arab Gulf since 2003, linking regional events to the development of local Shi'a strategies and attitudes toward citizenship, political reform, and transnational identity. He finds that, while the Gulf Shi'a were inspired by their coreligionists in Iraq, Iran, and Lebanon, they ultimately pursued greater rights through a nonsectarian, nationalist approach. He also discovers that sectarianism in the region has largely been the product of the institutional weaknesses of Gulf states, leading to excessive alarm by entrenched Sunni elites and calculated attempts by regimes to discredit Shi'a political actors as proxies for Iran, Iraq, or Lebanese Hizballah. Wehrey conducts interviews with nearly every major Shi'a leader, opinion shaper, and activist in the Gulf Arab states, as well as prominent Sunni voices, and consults diverse Arabic-language sources.
Visa hela texten

This is an excellent book and an important piece of scholarship. Frederic M. Wehrey has written a compelling, thoughtful, and original analysis of the new politics of sectarianism in the Persian Gulf since 2003. He is well positioned to write such a book, having traveled extensively in the region and spent considerable time with the most important political figures in Kuwait, Saudi Arabia, and Bahrain. His tone is commanding, the research is impressive, and the result is timely and vital. Wehrey's book is the best study I have seen yet of these pressing matters. -- Toby Jones, Rutgers University Wehrey has written a finely grained, insightful, and carefully researched contemporary study of Sectarian Politics in the Gulf. He offers insights on the broader Arab world and reveals that sectarian identity is no artificial construct but a culturally embedded and historically honed aspect of self. Yet he also demonstrates that sectarianism has been wielded cynically by both powerful rulers (Saudi Arabia) and insecure, easily manipulated monarchs (as in Bahrain) to foment division and divert legitimate accusations of injustice, discrimination, and opprobrious violations of basic human rights. This is the best book on the topic and a must read for policy makers. -- Augustus Richard Norton, Boston University Frederic M. Wehrey has produced a detailed, reliable and readable account of how regional and domestic factors combined to produce the "sectarianization" of politics in Saudi Arabia, Bahrain and Kuwait since the Iraq War of 2003. He skillfully demonstrates the ways different government policies in the three countries toward both Sunni and Shia groups produced different political outcomes in each. A great strength of the book is his careful analysis of factional politics within Shia and Sunni political currents in each country. -- F. Gregory Gause, III, University of Vermont Sectarian Politics in the Gulf represents the most up-to-date and insightful study on the politics of sectarianism in three key Gulf countries: Saudi Arabia, Kuwait and Bahrain. Far from being an intrinsic or innate feature of these societies, Prof. Wehrey shows in careful detail how sectarianism is invoked, produced and instrumentalized, and for very specific goals by governments, clerics as well as members of the Shii opposition. The book's argument situates sectarianism within local and regional political dynamics and contexts, and through this underscores that as a political phenomenon sectarianism cannot be apprehended by historically-rooted religious hatred. Based on a careful reading of primary sources and extensive fieldwork in the region, including in-depth interviews with many of the key activists, this book provides the most comprehensive and readable account of religious politics in the Gulf today. -- Bernard Haykel, Princeton University Offering coherent and lucid analysis of what has become a main feature of Gulf politics since the Arab Spring, this book is a must read for anybody interested in Gulf political dynamics and sectarianism in the Middle East. -- Laurence Louer, author of Transnational Shia Politics in the Gulf and Shiism and Politics in the Middle East One of FP's Best Books on the Middle East for 2013...Wehrey's new book offers a theoretically sophisticated and empirically rich overview of the politics of Sunni-Shiite relations across the Gulf. His extensive research on the ground across the Gulf comes through powerfully, as does his balanced analytical sensibility. It should be required reading for anyone interested in Sunni-Shiite relations or in the regional politics of the Gulf. -- Marc Lynch Foreign Policy A model of meticulous scholarship and comprehensive research... An essential academic library acquisition for Middle Eastern Studies reference collections. MidWest Book Review The book is chock-full of insights and a deeply nuanced understanding of regional Shiite-Sunni tensions and is a fine addition to other recent tr

Frederic M. Wehrey is a senior associate in the Middle East Program at the Carnegie Endowment for International Peace. He is a specialist in the politics of the Persian Gulf, and his articles and commentary have appeared in the New York Times, the Washington Post, the Financial Times, Foreign Affairs, and Foreign Policy. He holds a doctorate in international relations from St. Antony's College, Oxford University.