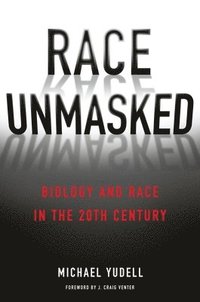 Biology and Race in the Twentieth Century

av Michael Yudell
Häftad Engelska, 2018-05-01
469
Köp
Spara som favorit
Skickas inom 7-10 vardagar.
Gratis frakt inom Sverige över 159 kr för privatpersoner.
Finns även som
Visa alla 2 format & utgåvor
Race, while drawn from the visual cues of human diversity, is an idea with a measurable past, an identifiable present, and an uncertain future. The concept of race has been at the center of both triumphs and tragedies in American history and has had a profound effect on the human experience. Race Unmasked revisits the origins of commonly held beliefs about the scientific nature of racial differences, examines the roots of the modern idea of race, and explains why race continues to generate controversy as a tool of classification even in our genomic age. Surveying the work of some of the twentieth century's most notable scientists, Race Unmasked reveals how genetics and related biological disciplines formed and preserved ideas of race and, at times, racism. A gripping history of science and scientists, Race Unmasked elucidates the limitations of a racial worldview and throws the contours of our current and evolving understanding of human diversity into sharp relief.
Visa hela texten

How can a concept that has been so debunked as a biological reality keep rising from the dead? Race Unmasked helps answer this by illustrating the troubling story of the sustained, strained, and stained history of the concept of race in scientific thought and practice. -- David Rosner, Columbia University We have needed a reassessment and an intelligent book on how racial categorizing grows within twentieth- and twenty-first-century science without using the simple labels of 'racism' or 'racist.' Race Unmasked is a terrific guide to the often invisible, intertwined terrain of science and politics around race. Re-reading the past with an eye toward nuance and clarity, Michael Yudell understands how 'race' comes to be unintentionally hidden yet still can be uncovered and critiqued. This book should find its way into classrooms across the curriculum. -- Susan M. Reverby, Wellesley College, author of <i>Examining Tuskegee: The Infamous Syphilis Study and Its Legacy</i> Race matters. All over the world we sort each other into groups by skin color, hair texture, and other physical characteristics, yet as Michael Yudell reminds us in this masterful, engaging, and important book, we barely have a clue about the biological basis for what we are doing. Race Unmasked is just the right remedy for those seeking to better understand the horrors and wrongs of racism. -- Arthur L. Caplan, New York University Langone Medical Center Michael Yudell has given us a fascinating and perceptive study of 'man's most dangerous myth.' This insightful book on race should be read widely by anyone concerned with the multiple uses, misuses, tangled history, and persistent confusions over this vexed and potent concept. -- Keith Wailoo, Princeton University A challenging, well-researched work that clearly shows the interconnectedness of scientific and social thought. * Kirkus Reviews * A detailed history of the concept of race and its evolution throughout the 20th century. * Library Journal (starred review) * This intensely deliberative book unearths many subtle and not-so-subtle examples of this complex historic relationship. * Publishers Weekly * Yudell, a historian of public health, argues that the complicated interaction of science and race visible in the eugenics movement is still playing out. -- Bryan Bello * Science News * Race Unmasked is worth reading.... Yudell shows clearly the interplay between science, society, and the changing definitions of race that were central to 20th-century history. * Choice * A timely, readable and engaging contribution to the growing literature on race and science. -- Lundy Braun * Social History of Medicine * Race Unmasked proves itself of enormous importance not only for those who wish to understand the evolution of race as a concept but also for those studying the place of science in American culture. * American Studies * An interesting, thorough, and informative review of the early history of eugenics.... well written and highly readable. * BioScience * [Race Unmasked] is an important, thought-provoking book and deserves to be widely read by people in all disciplines, but especially by the next generation of geneticists who might need to more fully understand the deep historical roots of their discipline. -- John B. Jenkins * The Quarterly Review of Biology * This engaging book is a must-read for nurses, physicians, scientists, academics, and all who continue to try to understand diversity in our society today. -- Barbara Mann Wall * Nursing History Revew * This impressive book proceeds to challenge the standard narrative of race science's postwar decline and fall.... Yudell follows in the footsteps of historians such as Richard Hofstadter and Charles E. Rosenberg-scholars who have uncovered the interdependence of biology and American social thought. -- Warwick Anderson * Journal of American History * A welcomed contribution to understanding the history of the present. -- Terence Keel * Journal of the His

Michael Yudell is associate professor and chair of the Department of Community Health and Prevention at the Dornsife School of Public Health, Drexel University. He is author of the blog The Public's Health for the Philadelphia Inquirer and his prior books include Welcome to the Genome: A User's Guide to the Genetic Past, Present, and Future and The Genomic Revolution: Unveiling the Unity of Life.