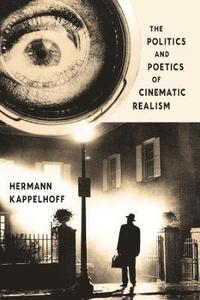 The Politics and Poetics of Cinematic Realism

av Hermann Kappelhoff
Inbunden Engelska, 2015-08-11
789
Köp
Spara som favorit
Skickas inom 5-8 vardagar.
Fri frakt inom Sverige för privatpersoner.
Finns även som
Visa alla 2 format & utgåvor
Hermann Kappelhoff casts the evolution of cinema as an ongoing struggle to relate audiences to their historical moment. Appreciating cinema's unique ability to bind concrete living conditions to individual experience (which existing political institutions cannot), he reads films by Sergei Eisenstein and Pedro Almodovar, by the New Objectivity and the New Hollywood, to demonstrate how cinema situates spectators within society. Kappelhoff applies the Deleuzean practice of "thinking in images" to his analysis of films and incorporates the approaches of Jacques Ranciere and Richard Rorty, who see politics in the permanent reconfiguration of poetic forms. This enables him to conceptualize film as a medium that continually renews the audiovisual spaces and temporalities through which audiences confront reality. Revitalizing the reading of films by Visconti, Fassbinder, Kubrick, Friedkin, and others, Kappelhoff affirms cinema's historical significance while discovering its engagement with politics as a realm of experience.
Visa hela texten

A major work of critical writing on film, and one that moves the intellectual discourse about film, politics, and the aesthetic movements and projects of the twentieth century forward by several steps. -- Robert Burgoyne, author of Film Nation: Hollywood Looks at US History (2010) and The Hollywood Historical Film (2008). Kappelhoff distinguishes himself as an astute analytical thinker and as a film theorist who plies the history of the medium and its shifting interpretations for the underlying implications about the 'big' questions that animate the humanities. -- Johannes von Moltke, University of Michigan Since the 1920s, the cinema has been closely associated with the development of aesthetic utopias. Drawing on the writings of Ranciere, Brecht and Kracauer, Hermann Kappelhoff traces the legacy of these utopias in the films of the late Visconti, the early Fassbinder, the New Hollywood of A Clockwork Orange and The Exorcist, and the flamboyant oeuvre of Pedro Almodovar. What emerges is a fascinating study of cinema as a cultural institution that unlike any other helps us experience the complexities of social reality and envision a new symbiosis between poetics and politics. -- Gerd Gemunden, author of Continental Strangers: German Exile Cinema, 1933-1951 Kappelhoff, one of Germany's most accomplished film scholars, endowed with a uniquely philosophical grasp of history in the tradition of Kracauer, offers in The Politics and Poetics of Cinematic Realism a precise reassessment of realism across a historical spectrum, while also enlisting Fassbinder and Almodovar as realists of the body and of communities to come. -- Thomas Elsaesser, Columbia University Kappelhoff offers an engaging and thoughtful account of cinematic experience framed by deeply original readings of Richard Rorty's pragmatist account of solidarity and community, Jacques Ranciere's writings on politics and aesthetic experience, and Gilles Deleuze's philosophy of film. Here Kappelhoff rethinks the concept of realism as a lived practice within which life and art, politics and poetics, indeed reality and image, are experienced as inseparable activities that dynamically shape our sense of the worlds and the communities we live in. In so doing, he also produces new and convincing accounts of the theories of Sergei Eisenstein and Siegfried Kracauer, as well as the films of Luchino Visconti, Rainer Werner Fassbinder, Pedro Almodovar, and others. -- D. N. Rodowick, University of Chicago, author of Philosophy's Artful Conversation

Bloggat om The Politics and Poetics of Cinematic Rea...

Hermann Kappelhoff is a professor in the Department for Film Studies at the Freie Universitat Berlin. He is the author of Matrix der Gefuhle: Das Kino, das Melodrama und das Theater der Empfindsamkeit, a major study on the cinematic melodrama as a paradigm of artificial emotions.

Preface and Acknowledgments 1. Poetics and Politics 2. Before the War: The Avant-garde, Film, and the Utopia of Art 3. After the War: Cinema as the Site of Historical Consciousness 4. After '68: The Politics of Form 5. Beyond Classical Hollywood Cinema 6. A New Sensitivity Notes Bibliography Index