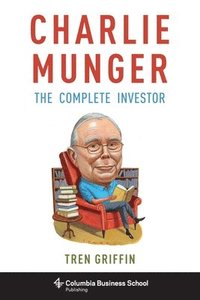 av Tren Griffin
Häftad Engelska, 2017-10-10
187
Köp
Spara som favorit
Finns även som
Visa alla 3 format & utgåvor
Charlie Munger, Berkshire Hathaway's visionary vice chairman and Warren Buffett's indispensable financial partner, has outperformed market indexes again and again, and he believes any investor can do the same. His notion of "elementary, worldly wisdom"-a set of interdisciplinary mental models involving economics, business, psychology, ethics, and management-allows him to keep his emotions out of his investments and avoid the common pitfalls of bad judgment. Munger's system has steered his investments for forty years and has guided generations of successful investors. This book presents the essential steps of Munger's investing strategy, condensed here for the first time from interviews, speeches, writings, and shareholder letters, and paired with commentary from fund managers, value investors, and business-case historians. Derived from Ben Graham's value-investing system, Munger's approach is straightforward enough that ordinary investors can apply it to their portfolios. This book is not simply about investing. It is about cultivating mental models for your whole life, but especially for your investments.
Visa hela texten

Charlie Munger is, arguably, the world's best investor. His 'worldly wisdom'-a latticework of understanding separate disciplines-is a powerful way to achieve superior investment results. Without it, success in the market-or anywhere else-is a short-lived fluke. -- Robert Hagstrom, author of The Warren Buffett Way and Investing: The Last Liberal Art Griffin offers an elegantly unified theory of Munger's ideas, organized in a coherent framework from a generous sampling of his scattered remarks in various forums over many years. Intelligent, thoughtful, helpful-and a delight to read. -- Lawrence Cunningham, author of Berkshire Beyond Buffett: The Enduring Value of Values What if I told you that the world's greatest living investor was also one of the most prolific writers and thinkers on the subject? And what if there were a single book containing all of his most insightful comments in a highly focused series of lessons, anecdotes, and instructions for success? I'm happy to tell you that, in Tren Griffin's Charlie Munger, that book has finally arrived. -- Joshua M. Brown, CEO, Ritholtz Wealth Management, author of Backstage Wall Street Griffin is better than anyone else at explaining the most important ideas from the best and brightest minds in business and investing in a way people can easily understand. This book is overflowing with wisdom. Readers will receive a master's degree in decision making, investing, human psychology, and much more. The definitive book on Warren Buffet's business partner. -- Ben Carlson, author of A Wealth of Common Sense: Why Simplicity Trumps Complexity in Any Investment Plan Munger's life is about facing reality, from personal relationships to lofty financial transactions. Griffin demonstrates how Munger sees 'possible' where others see the opposite. How Munger sees the weeds in the river yet also the wonderful fish swimming there. -- Janet Lowe, author of Damn Right: Behind the Scenes with Berkshire Billionaire Charlie Munger Charlie Munger is one of the greatest thinkers of our time. Combine his wisdom with Griffin's ability to synthesize thoughts and this book is truly a work of wisdom. It will guide you on how to think differently, which is the most important-and most lacking-skill among business leaders and investors. -- Morgan Housel, author of Everyone Believes It, Most Will Be Wrong: Motley Thoughts on Investing and the Economy Griffin does an extraordinary job of curating, synthesizing, and organizing the vast wisdom Munger has left for humanity.Farnam Street -- Shane Parrish Farnam Street A treasure trove of observations and comments by Mr. Munger, Warren Buffett's investment expert. -- Nancy K. Webman Pensions & Investments All who are interested in finance will want this book... Highly recommended. Choice If you put it down feeling as if you haven't learned enough, blame yourself, not the author. Better Investing Well-organized and thoughtful... Griffin expertly displays how Munger's own ideas both emerged from, and later departed with the intellectual foundations laid by [Ben] Graham. The Charlieton

Tren Griffin works at Microsoft. Previously, he was a partner at Eagle River, a private equity firm controlled by Craig McCaw, with investments in the telecommunication and software industries, including McCaw Cellular, Nextel, Nextel Partners, XO Communications, Teledesic, and many start-up firms. His early career included five years working and living as a business consultant in Korea and Australia. Tren blogs about investing and other topics at 25iq.com. He is the author of The Global Negotiator: Building Strong Business Relationships Anywhere in the World; Korea, The Tiger Economy; Taiwan's Economy; Ah Mo: Legends from the Northwest; and More Ah Mo.