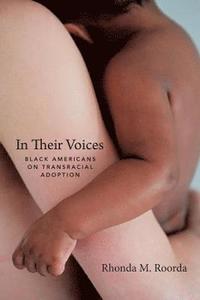 av Rhonda Roorda
Inbunden Engelska, 2015-11-03
1189
Köp
Spara som favorit
Skickas inom 7-10 vardagar.
Fri frakt inom Sverige för privatpersoner.
Finns även som
Visa alla 2 format & utgåvor
While many proponents of transracial adoption claim that American society is increasingly becoming "color-blind," a growing body of research reveals that for transracial adoptees of all backgrounds, racial identity does matter. Rhonda M. Roorda elaborates significantly on that finding, specifically studying the effects of the adoption of black and biracial children by white parents. She incorporates diverse perspectives on transracial adoption by concerned black Americans of various ages, including those who lived through Jim Crow and the Civil Rights era. All her interviewees have been involved either personally or professionally in the lives of transracial adoptees, and they offer strategies for navigating systemic racial inequalities while affirming the importance of black communities in the lives of transracial adoptive families. In Their Voices is for parents, child-welfare providers, social workers, psychologists, educators, therapists, and adoptees from all backgrounds who seek clarity about this phenomenon. The author examines how social attitudes and federal policies concerning transracial adoption have changed over the last several decades. She also includes suggestions on how to revise transracial adoption policy to better reflect the needs of transracial adoptive families. Perhaps most important, In Their Voices is packed with advice for parents who are invested in nurturing a positive self-image in their adopted children of color and the crucial perspectives those parents should consider when raising their children. It offers adoptees of color encouragement in overcoming discrimination and explains why a "race-neutral" environment, maintained by so many white parents, is not ideal for adoptees or their families.
Visa hela texten

In Their Voices is a historical lesson in transracial adoption that adoptive parents shouldn't miss. It also provides a deep look at the policy and practices currently in place in the child welfare and domestic adoption system - these issues should also be deeply considered by the social workers, agencies, and others working in the adoption community. -- Kim Phagan-Hansel Adoption Today A deft interviewer. Adoptive Families Roorda's newest text on transracial adoption comes at a timely and proitious moment... Highly recommended. Choice A fascinating read... definitely on the recommended reading list. Fostering Families This book should be required reading for all White Americans with plans to adopt Black children. It is an indispensable resource for navigating the often challenging and unpredictable terrain of childrearing across the color line. PsycCritiques

Rhonda M. Roorda, M.A., was adopted into a white family and raised with two nonadopted siblings. She is a national speaker on transracial adoption and a recipient of the Judge John P. Steketee Adoption Hero Award from the Adoptive Family Support Network (MI). With Rita J. Simon, she coauthored a landmark trilogy of books on transracial adoption (In Their Own Voices, In Their Parents' Voices, and In Their Siblings' Voices). She works as a fund administrator at an educational advocacy organization in Lansing, Michigan.