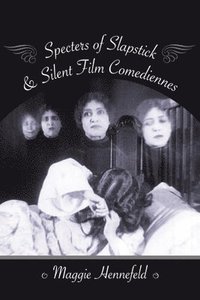 av Maggie Hennefeld
Inbunden Engelska, 2018-03-27
699
Köp
Spara som favorit
Skickas inom 7-10 vardagar.
Fri frakt inom Sverige för privatpersoner.
Finns även som
Visa alla 2 format & utgåvor
Women explode out of chimneys and melt when sprayed with soda water. Feminist activists play practical jokes to lobby for voting rights, while overworked kitchen maids dismember their limbs to finish their chores on time. In early slapstick films with titles such as Saucy Sue, Mary Jane's Mishap, Jane on Strike, and The Consequences of Feminism, comediennes exhibit the tensions between joyful laughter and gendered violence. Slapstick comedy often celebrates the exaggeration of make-believe injury. Unlike male clowns, however, these comic actresses use slapstick antics as forms of feminist protest. They spontaneously combust while doing housework, disappear and reappear when sexually assaulted, or transform into men by eating magic seeds-and their absurd metamorphoses evoke the real-life predicaments of female identity in a changing modern world. Specters of Slapstick and Silent Film Comediennes reveals the gender politics of comedy and the comedic potentials of feminism through close consideration of hundreds of silent films. As Maggie Hennefeld argues, comedienne catastrophes provide disturbing but suggestive images for comprehending gendered social upheavals in the early twentieth century. At the same time, slapstick comediennes were crucial to the emergence of film language. Women's flexible physicality offered filmmakers blank slates for experimenting with the visual and social potentials of cinema. Specters of Slapstick and Silent Film Comediennes poses major challenges to the foundations of our ideas about slapstick comedy and film history, showing how this combustible genre blows open age-old debates about laughter, society, and gender politics.
Visa hela texten

Will set new agendas in our understanding of comic theory, early film history, feminist performances, and the sources of laughter. -- Tom Gunning * Cultural Critique * Specters of Slapstick and Silent Film Comediennes has been quite a revelation to me. -- Scott Adlerberg Hennefeld draws on hundreds of films to reveal the radical interest and specificity of the silent film comediennes who humorously ruptured themselves while negotiating the shifting place of women's bodies in cinema's early years. Forging a rigorous third way between "killjoy refusal" and "unruly disruption" using a "Laughing Methodology" to counter misogynist violence, this brilliant book illuminates the vital link between feminist laughter and the slow-burn pleasure of feminist thought. -- Karen Redrobe, University of Pennsylvania Hennefeld does a remarkable job of framing the politics of early film comedy in relation to late nineteenth- and early twentieth-century philosophies of laughter. This is a far-reaching study that will change our understanding of the history of early film slapstick and gender. -- Robert J. King, Columbia University Simultaneously hilarious and seriously incisive, Specters of Slapstick and Silent Film Comediennes is a dazzling demonstration of the way in which the female body in early film comedy is the privileged site for the display of the cinema's defamiliarization of the world. Hennefeld skillfully links the centrality of women in comic films of mobility and catastrophe to anxieties surrounding their rapidly changing social position. This is a marvelous analysis. -- Mary Ann Doane, University of California, Berkeley Hennefeld's thoughtful, comprehensive study, which does much to illuminate an overlooked archive of films, demonstrates clearly that these texts are themselves part of an 'undead past' that haunts the development of film throughout the 20th century and resonates with conventions of film comedy today. -- Rebecca Burditt * Film and History * Hennefeld's thoughtful reflections on theories of humor flesh out not only her discussions of slapstick but also the fraught relation between what makes us laugh and feminism. * Studies in American Humor * Maggie Hennefeld's comprehensive and in-depth study of female comedians in the silent film era...is an important intervention in the field of comedy studies as well as gender studies...a must read for students and scholars interested in gender, in film history, and in comedy. * Early Popular Visual Culture * This book's animated tone and savvy provocations [cause readers] to think about women's silent-era comedy in new, dynamic, and surprising ways...In addition, Specters of Slapstick offers a significant new critical approach to women's comedy for scholarship. * Journal of Cinema and Media Studies * The depth of Hennefeld's analysis, the breadth of her research, the many cinematic examples she uses to illustrate her points, and the compelling nature of her arguments make the book a moving tribute to these women and an engaging and informative read. * Women's Studies * Invite[s] us to rethink our preconceptions about the place of women's comic performances in film history, to imagine the effects of spectator laughter a century ago, and to examine the sources of our own delight in those performances. * Journal of Cinema and Media Studies * Hennefeld's book represents a significant contribution to the field in its refreshing methodological combination of cultural analysis and feminist historiography. * NECSUS * Delivers on its ambitious commitment to 'find a third way, an alternative to the impasses of the killjoy's refusal and the unruly woman's disruption.' * Screen * Hennefeld's book concludes with a call to "make visible the forgotten histories of feminist social struggle and of women's cultural visibility". Rather neatly, Specters of Slapstick offers an engrossing and energising example of that very work. -- Pame

Maggie Hennefeld is assistant professor of cultural studies and comparative literature at the University of Minnesota, Twin Cities.