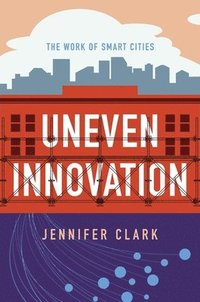 The Work of Smart Cities

av Jennifer Clark
Inbunden Engelska, 2020-02-25
729
Köp
Spara som favorit
Skickas inom 7-10 vardagar.
Gratis frakt inom Sverige över 159 kr för privatpersoner.
Finns även som
Visa alla 2 format & utgåvor
The city of the future, we are told, is the smart city. By seamlessly integrating information and communication technologies into the provision and management of public services, such cities will enhance opportunity and bolster civic engagement. Smarter cities will bring in new revenue while saving money. They will be more of everything that a twenty-first century urban planner, citizen, and elected official wants: more efficient, more sustainable, and more inclusive. Is this true? In Uneven Innovation, Jennifer Clark considers the potential of these emerging technologies as well as their capacity to exacerbate existing inequalities and even produce new ones. She reframes the smart city concept within the trajectory of uneven development of cities and regions, as well as the long history of technocratic solutions to urban policy challenges. Clark argues that urban change driven by the technology sector is following the patterns that have previously led to imbalanced access, opportunities, and outcomes. The tech sector needs the city, yet it exploits and maintains unequal arrangements, embedding labor flexibility and precarity in the built environment. Technology development, Uneven Innovation contends, is the easy part; understanding the city and its governance, regulation, access, participation, and representation-all of which are complex and highly localized-is the real challenge. Clark's critique leads to policy prescriptions that present a path toward an alternative future in which smart cities result in more equitable communities.
Visa hela texten

Written by one of the world's foremost experts, Uneven Innovation is a must-have book for everyone interested in the potential and the pitfalls of the smart cities narrative. It provides both a critical review of the main debates surrounding smart cities and thought-provoking insights into future research and policy agendas. -- Ben Derudder, Ghent University Uneven Innovation is a superb, original, and informative intervention into ongoing debates about what a smart city is and its implications across all cities. Grounded in significant original and secondary research, Clark links smart cities to urban innovation and the production of markets, crucially arguing that the smart city is an economic rather than technological issue. -- Robyn Dowling, University of Sydney Uneven Innovation problematizes the smart city project, showing us the many ways that it continues-rather than disrupts-underlying patterns of inequality, precariousness, and powerlessness. Clark's insightful critique is not only a call for action, her work draws to light the 'operational standards' that all cities should be pushed to uphold when engaging the latest urban development fad. An essential read for practitioners, activists, and scholars seeking to understand and shape the role of technology on the future of cities and the urban workforce. -- Nichola Lowe, University of North Carolina, Chapel Hill In Uneven Innovation, Jennifer Clark takes on the cult of urban innovation, cutting through the buzz and exposing the false promises of the smart city machine. It's a searching, critical account that opens horizons beyond the smart city limits, while also delving into the belly of the beast. A timely and necessary intervention. -- Jamie Peck, University of British Columbia Uneven Innovation provides a new framework for understanding the emergence of the smart city project. It is a geographically and historically nuanced approach to the current focus on smart cities. Clark leaves the reader in no doubt that technology is as likely to deepen as to address existing spatial inequalities. -- Kevin Ward, University of Manchester Jennifer Clark's enlightening book challenges the premise that smart cities are radically disruptive. With an economic geographer's critical eye, she shows how the smart cities project follows established patterns of corporations beggaring the public sector, converting citizens into consumers and precarious workers, and reinforcing preexisting spatial inequalities. Yet Uneven Innovation is not a screed; it is well-reasoned, empirically-rich analysis of the interface between tech companies, new platforms and infrastructures, and urban governance that should be the starting point for all discussions of this fast-growing phenomenon. -- Rachel Weber, University of Illinois at Chicago In Uneven Innovation, Jennifer Clark delves deep into the contemporary Smart Cities discourse. Socio-spatial and economic dynamics that are inherent to processes of technological change and ensuing (local) uneven economic development opportunities are diligently exposed via expert insights into the Urban Innovation Project. It's an agenda setting account of extraordinary relevance. -- Dieter Kogler, University College Dublin For anyone interested in the role of technology and the tech industry in shaping modern cities, Uneven Innovation is a must read. Jennifer Clark's analysis cuts through the hype around smart cities, and provides a refreshing critical perspective, highlighting both the benefits of emerging technologies and the ways they have been used to exacerbate urban inequalities. -- Chris Benner, Dorothy E. Everett Chair in Global Innovation and Social Entrepreneurship, University of California Santa Cruz Jennifer Clark's compelling book Uneven Innovation places these claims in context and examines them with the discerning eye of an economic geographer. * Journal of Urban Affairs *

Jennifer Clark is professor and head of the City and Regional Planning Section at the Knowlton School of Architecture in the College of Engineering at the Ohio State University. Her previous books include Remaking Regional Economies: Power, Labor, and Firm Strategies in the Knowledge Economy (with Susan Christopherson, 2007) and Working Regions: Reconnecting Innovation and Production in the Knowledge Economy (2013).