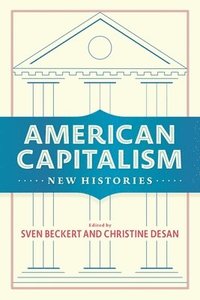 av Sven Beckert, Christine Desan
Inbunden Engelska, 2018-02-06
328
Köp
Spara som favorit
Finns även som
Visa alla 2 format & utgåvor
The United States has long epitomized capitalism. From its enterprising shopkeepers, wildcat banks, violent slave plantations, and raucous commodities trade to its world-spanning multinationals, its massive factories, and the centripetal power of New York in the world of finance, America has shaped political economy for two centuries and more. But an understanding of "capitalism" is as elusive as it is urgent. What does it mean to make capitalism a subject of historical inquiry? What is its potential across multiple disciplines, alongside different methodologies, and in a range of geographic and chronological settings? And how does a focus on capitalism change our understanding of American history? American Capitalism collects cutting-edge research from prominent scholars, sampling the latest work in the field. Rather than a monolithic perspective, these broad-minded and rigorous essays venture new angles on finance and debt, women's rights, slavery and political economy, labor, and regulation, among other topics. Together, the essays suggest emerging themes in the field: a fascination with capitalism as it is made by public authority, how it is experienced in the detail of daily life, how it spreads across the globe, and how it can be reconceptualized as a discrete and quantified object. A major statement for a wide-open field, this book demonstrates the breadth and scope of the work the history of capitalism can provoke.
Visa hela texten

Sven Beckert and Christine Desan are leaders in the burgeoning history of capitalism field, and they have put together a volume of outstanding scholars whose essays, in their chronological reach and subject matter, show this new literature at its best. A very fine and promising collection. -- Steven Hahn, New York University

Acknowledgments Introduction Part I. Making Markets 1. The Capitalist Constitution, by Woody Holton 2. What Was the Great Bull Market? Value, Valuation, and Financial History, by Julia Ott 3. The New York City Fiscal Crisis and the Idea of the State, by Kim Phillips-Fein Part II. Claiming and Contesting Capitalism 4. Utopian Capitalism, by Richard White 5. The Sovereign Market and Sex Difference: Human Rights in America, by Amy Dru Stanley 6. Negro Cloth: Mastering the Market for Slave Clothing in Antebellum America, by Seth Rockman 7. Revulsions of Capital: Slavery and Political Economy in the Epoch of the Turner Rebellion, Virginia, 1829-1832, by Christopher Tomlins Part III. "Knowing" Capital 8. Risk, Uncertainty, and Data: Managing Risk in Twentieth-Century America, by Mary Poovey 9. Representations of Capitalism in the Gilded Age and Progressive Era, by Peter Knight 10. Value of Life: Insurance, Slavery, and Expertise, by Michael Ralph Part IV. Refiguring Space from the Local to the Global 11. War by Other Means: Mercantilism and Free Trade in the Age of the American Revolution, by Eliga H. Gould 12. "Innovative Solutions to Modern Agriculture": Capitalist Farming, Global Competition, and the Devolution of the U.S. Rice Industry, by Peter A. Coclanis 13. Importing the World's Fair, by Michael Zakim 14. Plantation Dispossessions: The Global Travel of Agricultural Racial Capitalism, by Kris Manjapra Selected Bibliography List of Contributors Index