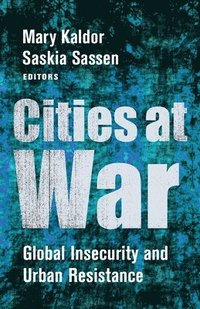 av Mary Kaldor, Saskia Sassen
Häftad Engelska, 2020-03-31
303
Köp
Spara som favorit
Finns även som
Visa alla 2 format & utgåvor
Warfare in the twenty-first century goes well beyond conventional armies and nation-states. In a world of diffuse conflicts taking place across sprawling cities, war has become fragmented and uneven to match its settings. Yet the analysis of failed states, civil war, and state building rarely considers the city, rather than the country, as the terrain of battle. In Cities at War, Mary Kaldor and Saskia Sassen assemble an international team of scholars to examine cities as sites of contemporary warfare and insecurity. Reflecting Kaldor's expertise on security cultures and Sassen's perspective on cities and their geographies, they develop new insight into how cities and their residents encounter instability and conflict, as well as the ways in which urban forms provide possibilities for countering violence. Through a series of case studies of cities including Baghdad, Bogota, Ciudad Juarez, Kabul, and Karachi, the book reveals the unequal distribution of insecurity as well as how urban capabilities might offer resistance and hope. Through analyses of how contemporary forms of identity, inequality, and segregation interact with the built environment, Cities at War explains why and how political violence has become increasingly urbanized. It also points toward the capacity of the city to shape a different kind of urban subjectivity that can serve as a foundation for a more peaceful and equitable future.
Visa hela texten

Conflict, armed violence, and military interventions are brutal facts of life in cities throughout the world. While some commentators proclaim that cities can take up governance where states fail, or even that mayors might rule the world, reality is more complex. This book is a crucial guide to the reality of urban insecurity-and urban capabilities to cope with insecurity. Its cases come mainly from less rich countries with more or less manifest wars-but the issues considered matter everywhere. -- Craig Calhoun, Arizona State University and the London School of Economics Sobering but with seams of hope, Cities at War brings together a state-of-the-art collection providing rich analysis of diverse contemporary cities embattled by insecurity, not just as urban theaters of violence or sites of broader conflicts but rather as places of human hankering and ingenious inventiveness and where cities themselves 'talk back.' -- Jo Beall, London School of Economics and Political Science Urbanization is spreading and conflict in urban areas changes the nature of war. Urbanists, peacekeepers, and military strategists should read this book. There are positive and negative lessons to be learned. -- Rt. Hon. Clare Short Thinking about war is too often trapped by the idea of a 'battlefield'-literally an open space in which social geographies are suspended for the duration of an armed contest. In this innovative volume, Mary Kaldor and Saskia Sassen fuse the paradigms of 'new war' and 'urban capabilities' to illuminate how urbanization transforms the conduct of war, societal survival during war, and resistance to war. -- Alex de Waal, World Peace Foundation Cities at War places important questions about how contemporary wars are affecting cities on the intellectual map via a well-chosen collection of case studies that convey the variety of urban experiences of warfare, violence, and avoidance of violence in the twenty-first century. This effective study offers a rich contribution to the field. -- Martin Shaw, author of <i>Genocide and International Relations: Changing Patterns in the Transitions of the Late Modern World</i> Kaldor and Sassen bring a powerful analysis of the urbanization of warfare as a multi-scalar and transnational process. The book will be of particular interest to researchers working on conflict-ridden cities who intend to understand the working of political violence in all its complexity. * Ethnic & Racial Studies * this book is a highly valuable resource for scholars in the fields of Urban Studies as well as Security, War and Peace Studies. The richness of the empirical material, the individual chapters that speak to each other so well and the insights into patterns of urbanity provide excellent inputs into discussions of power, resistance, inequality and violence. * Global Policy Journal * Recommended. * Choice *

Mary Kaldor is professor of global governance and director of the Civil Society and Human Security Research Unit in the Department of International Development at the London School of Economics. She is the coeditor of The Quest for Security: Protection Without Protectionism and the Challenge for Global Governance (Columbia, 2013, with Joseph Stiglitz) and the author of New and Old Wars: Organized Violence in a Global Era (2012, third edition) and Global Security Cultures (2018) among other works. Saskia Sassen is the Robert S. Lynd Professor of Sociology and a member of the Committee for Global Thought at Columbia University. She is the author of many books, including Expulsions: Brutality and Complexity in the Global Economy (2014), The Global City (2001, second edition), and Cities in a World Economy (2018, fifth edition).

Acknowledgments Introduction: Global Insecurity and Urban Capabilities, by Mary Kaldor and Saskia Sassen 1. Bamako, Mali: Danger and the Divided Geography of International Intervention, by Ruben Andersson 2. Kabul: Bridging the Gap Between the State and the People, by Florian Weigand 3. Baghdad: War and Insecurity in the City, by Ali Ali 4. A Tale of Two Cities: Ciudad Juarez, El Paso, and Insecurity at the U.S.-Mexico Border, by Mary Martin 5. Responding to, or Perpetuating, Urban Insecurity? Enclave-Making in Karachi, by Sobia Ahmad Kaker 6. Violent Conflict and Urbanization in Eastern Democratic Republic of the Congo: The City as a Safe Haven, by Karen Buscher 7. Navigating Security in Bogota, by Johannes Rieken, Efrain Garcia-Sanchez, and Daniel Bear 8. "On the Margins of All Margins": Explaining (In)Security in Novi Pazar, Serbia, by Vesna Bojicic-Dzelilovic Conclusion: Spaces for Tactical Urbanism, by Saskia Sassen and Mary Kaldor Contributors Index