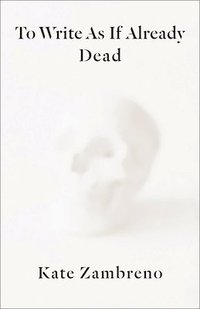 To Write as if Already Dead

av Kate Zambreno
Häftad Engelska, 2021-06-08
174
Köp
Spara som favorit
Finns även som
Visa alla 2 format & utgåvor
To Write As If Already Dead circles around Kate Zambreno's failed attempts to write a study of Herve Guibert's To the Friend Who Did Not Save My Life. In this diaristic, transgressive work, the first in a cycle written in the years preceding his death, Guibert documents with speed and intensity his diagnosis and disintegration from AIDS and elegizes a character based on Michel Foucault. The first half of To Write As If Already Dead is a novella in the mode of a detective story, searching after the mysterious disappearance of an online friendship after an intense dialogue on anonymity, names, language, and connection. The second half, a notebook documenting the doubled history of two bodies amid another historical plague, continues the meditation on friendship, solitude, time, mortality, precarity, art, and literature. Throughout this rigorous, mischievous, thrilling not-quite study, Guibert lingers as a ghost companion. Zambreno, who has been pushing the boundaries of literary form for a decade, investigates his methods by adopting them, offering a keen sense of the energy and confessional force of Guibert's work, an ode to his slippery, scarcely classifiable genre. The book asks, as Foucault once did, "What is an author?" Zambreno infuses this question with new urgency, exploring it through the anxieties of the internet age, the ethics of friendship, and "the facts of the body": illness, pregnancy, and death.
Visa hela texten

This book is a tour de force. I was completely awestruck by the way Zambreno enacts the concept of the title, and by the way she writes the body, hers and Guibert's. It is a moving performative act, a document of our time from the trenches, and a brilliant critical study. -- Moyra Davey, author of <i>Index Cards: Selected Essays</i> The transgressive novelist and first significant memoirist of life with AIDS, Herve Guibert was, by the time he died, expert at turning a book into a timebomb and vice versa. Thirty years later, against a backdrop of inequities exposed by the coronavirus public health crisis and amid her own ticking biology and professional precarity, Kate Zambreno considers the composite of guile and candor and care and betrayal that is high-stakes life-writing, itself perhaps a "virus that 'preys on the human propensity to connect.'" The result is Zambreno's most urgent and charged work since Heroines. -- Brian Blanchfield, author of <i>Proxies: Essays Near Knowing</i> Kate Zambreno's To Write As If Already Dead is portrait and self-portrait. It's a book about friendship, or friendships-famous, fictional, friends we've had and lost. More than this, it's about what it means to feel kinship with a particular book and writer, and so it's really about reading, that intimacy and solitude. Here, as ever, Zambreno proves herself a brilliantly generous and ambitious reader, one capable of engaging a text so acutely that the line between self and art blurs. To Write As If Already Dead is gossipy and smart, angry and agile, doubling and doubled-and a serious pleasure to read. -- Danielle Dutton, author of <i>Margaret the First</i> Kate Zambreno stylizes a thrilling form of reading as writing and writing as reading, one that speaks to the overlapping crises of our contemporary moment in tones compelling, honest, and withering in all the right ways. No one thinks better and more carefully about the embodied practice of writing. She is the only person who could have written this book. -- Amy Hollywood, author of <i>Acute Melancholia and Other Essays</i> In Kate Zambreno's To Write As If Already Dead, Herve Guibert's voice is restored to the present through an act of transportation that left me slightly afraid of Zambreno's power. But then that's why you read her, and him: for a new awe of life. -- Andrew Durbin, author of <i>Skyland</i> In this clever hybrid work, Zambreno interrogates her fascination with French writer and photographer Herve Guibert . . . A cascading meditation on what makes writing possible and necessary. * Publishers Weekly * A fascinating, ambitious, unforgettable work. * Literary Hub * To Write As If Already Dead just might be the first truly great book about the coronavirus pandemic -- Rhian Sasseen * Paris Review Daily Staff Picks * Kate Zambreno's latest book, To Write as if Already Dead, is a study of Guibert's uncompromising novel. Galvanized by much the same 'survival energy,' the conversation vibrates with eerie coincidence: two writers amid the chaos of a pandemic, working against erasure. -- Jessica Ferri * Los Angeles Times * [Zambreno] has some of [Guibert's] acidity, his charisma, his meditativeness, his improvisational grace. She has, too, his comfort with slipperiness, both in terms of subjectivity-is Guibert the "I" of his novels?-and of form . . . Despite its elliptical style, Zambreno's book cultivates patience, a digressive but ruminative mode that goes beyond close reading of Guibert toward an actual embodiment of his voice. -- Jeremy Lybarger * 4Columns * There's no one like Kate Zambreno at finding connections in the art she's consumed and making the reader feel like they too are a brilliant critical theorist. -- Maris Kreizman To Write As If Already Dead is a book that questions the point of writing, and proves the point that we need writers to explain what the hell is going on inside and outside of them

Kate Zambreno is the author of many acclaimed books, including Drifts (2020), Appendix Project (2019), Screen Tests (2019), Book of Mutter (2017), and Heroines (2012). Her writing has appeared in the Paris Review, Virginia Quarterly Review, and elsewhere. She teaches in the graduate nonfiction program at Columbia University and is the Strachan Donnelley Chair in Environmental Writing at Sarah Lawrence College. She is a 2021 Guggenheim Fellow in Nonfiction.

Part I. Disappearance Part II. To Write as if Already Dead Acknowledgments Notes