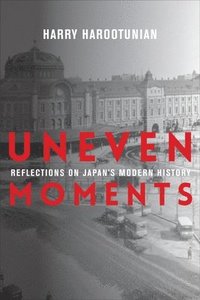 av Harry Harootunian
Häftad Engelska, 2019-02-05
349
Köp
Spara som favorit
Skickas inom 5-8 vardagar.
Fri frakt inom Sverige för privatpersoner.
Finns även som
Visa alla 2 format & utgåvor
Few scholars have done more than Harry Harootunian to shape the study of modern Japan. Incorporating Marxist critical perspectives on history and theoretically informed insights, his scholarship has been vitally important for the world of Asian studies. Uneven Moments presents a selection of Harootunian's essays on Japan's intellectual and cultural history from the late Tokugawa period to the present that span the many phases of his distinguished career and point to new directions for Japanese studies. Uneven Moments begins with reflections on area studies as an academic field and how we go about studying a region. It then moves into discussions of key topics in modern Japanese history. Harootunian considers Japan's fateful encounter with capitalist modernity and the implications of uneven development, examining the combinations of older practices with new demands that characterized the twentieth century. The book examines the making of modern Japan, the transformations of everyday life, and the collision between the production of forms of cultural expression and new political possibilities. Finally, Harootunian analyzes Japanese political identity and its forms of reckoning with the past. Exploring the shifting relationship among culture, the making of meaning, and politics in rich reflections on Marxism and critical theory, Uneven Moments presents Harootunian's intellectual trajectory and in so doing offers a unique assessment of Japanese history.
Visa hela texten

Harootunian's scholarly essays operate on an elevated intellectual plain, but they're immensely rewarding for those who work through them. Rooted in the historical, the lessons they offer are more vital than ever in today's world. * PopMatters * For readers interested in the complex relationship between culture and politics in Japan and elsewhere, this is essential reading. * Japan Times * The impact that Harootunian's imaginative and critical rereading of early modern and modern Japan has had on Japan studies in the United States and elsewhere is unfathomably deep. Each and every essay contained in this volume is a landmark work and remains essential for our understanding of the long and precarious process of Japan's metamorphosis into a modern society. -- Katsuya Hirano, author of <i>The Politics of Dialogic Imagination: Power and Popular Culture in Early Modern Japan</i> Harry Harootunian is a leading voice in Japanese intellectual history. It is no exaggeration to say that his work has shaped the field for the past forty years. These essays collectively provide an extended reflection on the intellectual and philosophical concerns that run through Harootunian's oeuvre, including the relationship between culture and politics; the problem of temporality, history, and modernity; and the intertwined projects of critical theory and critical area studies. This book will become a classic. -- Louise Young, University of Wisconsin-Madison To read forty years of Harry Harootunian's bristling reflections on Japanese history and thought is to come face to face with the most fundamental questions of our own conditions of thinking about history and theory and also about the intellectual life writ large. Each of the essays in this volume demands that we contend with a fierce, exacting, and passionate mind. -- Alan Tansman, author of <i>The Aesthetics of Japanese Fascism</i> Harry Harootunian is both a pioneer American scholar of modern Japanese history and a probing critic of mainstream analyses of Japan's turbulent past. This book is a brilliant summing up of his prolific career. -- Bruce Cumings, University of Chicago

Harry Harootunian is Max Palevsky Professor of History Emeritus at the University of Chicago, professor emeritus of East Asian studies at New York University, and adjunct senior research scholar at the Weatherhead East Asian Institute, Columbia University. His books include History's Disquiet: Modernity, Cultural Practice, and the Question of Everyday Life (Columbia, 2000) and Marx After Marx: History and Time in the Expansion of Capitalism (Columbia, 2015).

Acknowledgments Introduction: Uneven Moments from Japan's Modern History Part I. Imminent Criticism and Academic Discourse: Area Studies 1. Tracking the Dinosaur: Area Studies in a Time of "Globalism" 2. "Memories of Underdevelopment" After Area Studies Part II. Cultural Form and Political Withdrawal: Tokugawa Japan 3. Cultural Politics in Tokugawa Japan 4. Late Tokugawa Culture and Thought Part III. Pathways to Modernity's Present and the Enduring Everyday 5. Shadowing History: National Narratives and the Persistence of the Everyday 6. Overcome by Modernity: Fantasizing Everyday Life and the Discourse on the Social in Interwar Japan 7. Time, Everydayness, and the Specter of Fascism: Tosaka Jun and Philosophy's New Vocation 8. Allegorizing History: Marxism, Hani Goro, and the Demands of the Present 9. Philosophy and Answerability: The Kyoto School and the Epiphanic Moment of World History 10. Reflections from Fukushima: History, Memory, and the Crisis of Contemporaneity Part IV. Ideological Formation: Colluding with the Past 11. Visible Discourses/Invisible Ideologies 12. The Presence of Archaism/The Persistence of Fascism Previously Published Materials Index