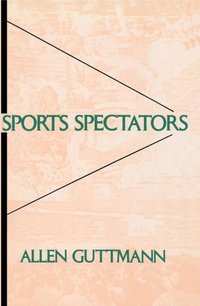 av Allen Guttmann
E-bok (EPUB - DRM), Engelska, 1986-11-04
399
Ladda ned
Spara som favorit
Laddas ned direkt
Läs i vår app för iPhone, iPad och Android
Finns även som
Visa alla 1 format & utgåvor
In his previous books Allen Guttmann has provided incisive perspectives on Avery Brundage's role in the Olympic movement and on the nature of modern sports. Now, in his latest book, the accomplished historian of sport turns his attention from the playing field to the grandstand. Sports Spectators, the first historical study of the subject from antiquity to today, is at once erudite and entertaining; comprehensive and succint.Guttmann first examines the history of sports spectators, starting with Ancient Greece and Rome. He then moves on to the Renaissance and traces three early sports -the tournament, archery, and early versions of football. The author then focuses on the emergenece of sports in post-Renaissance England, and discusses the curious spectacle of animal sports (bear- and bull-baiting and cockfighting), as well as the first appearance of combat sports such as sword fighting, stick fighting, and boxing. The book concludes its historical view by exploring contemporary baseball, football, rowing, tennis, and golf.From his chronological narrative, Guttmann shifts to detailed analysis of the economic, sociological, and psychological aspects of sports spectatorship. Who were, and are, sports spectators? What is their gender and social class? Have they normally been participants as well as fans? What are the political functions of sports-watching? What are the social dynamics of spectatorship?Guttmann provides fresh insights which will be useful to scholars and fascinating to everyone. Sports Spectators also looks at the dramatic transformations radio and television have made, and offers an incisive critique of today's sports-related violence, including the increasingly frequent incidences of spectator hooliganism. How violent (or peaceful) have spectators traditionally been? Has spectator violence increased or decreased?You needn't be a season ticket-holder to enjoy Sports Spectators. Allen Guttmann makes the history of fandom come alive for any reader interested in Western culture and what forms of entertainment reveal about us, as well as those concerned with the recent growth of spectator violence.
Visa hela texten