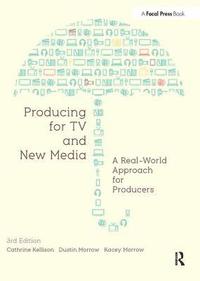 Producing for TV and New Media: A Real-World Approach for Producters 3rd Edition

A Real-World Approach for Producers

Producing for TV and New Media third edition is your guide to avoiding the obstacles and pitfalls commonly encountered by new and aspiring producers.

New to this edition:

* A revised and revamped companion website with all the sample forms and contracts in the book, updated web link resources, and much more

Written especially for new and aspiring producers, with insight that simply cannot be found in any other books, this new edition is an indispensable guide for anyone looking to find success as a new media or TV producer.
Visa hela texten

Cathrine Kellison's class was a huge influence on me-if you want a foot in the door in the cutthroat business of TV and new media, this book is a MUST READ.
-Silvio Horta, Creator, Executive Producer, and Head Writer of Ugly Betty

"Ms. Kellison has written a very readable, well organized and detailed text about how the disorganized business of television works.
-Richard P. Rubinstein, Executive Producer of Stephen King's The Stand miniseries and of Frank Herbert's Dune miniseries. Senior Producer of the upcoming "Dune feature from Paramount

"Ms. Kellison emphasizes the need to understand and protect each project in four ways: creatively, legally, technically, and financially. Not only does this book provide an encouraging, real-world approach to producing, it also borders on a philosophy for producers - the need for ethics, people skills, respect, collaboration, lifelong learning, and balance.
- Sandra J. Ruch, Executive Director/Publisher--International Documentary Association

...a must read for students and practitioners who want a complete road map through the maze of producing for television and new media. It is a definitive guide to what to do, and what not to do, in becoming a professional and successful television producer. Her chapter of first person interviews is worth the price of the book all by itself. This second edition is a real collaboration between classic producing skills and the future of new media.
- Al Lieberman, Executive Director - Entertainment, Media and Technology program, Stern School of Business, New York University

Bloggat om Producing for TV and New Media: A Real-Wo...

Cathrine Kellison's career as a writer/producer spanned two decades, and included an eclectic range of projects - from a CBS special to a PBS documentary, from corporate image pieces for IBM to behind-the-scenes celebrity interviews for MGM, from a kids' piece on recycling to educational films for teachers. She produced, written, and/or directed hundreds of hours of broadcast and non-broadcast programming for television and various avenues of new media.

Starting as a writer of feature-length scripts in Hollywood, Ms. Kellison moved into producing for NBC and, later, United Artists in New York City as Director of Creative Services. She then went independent, starting her own small-but-meaningful production company, Roseville Video. Ms. Kellison began teaching producing for television and film at New York University's Tisch School of the Arts in 1994, and now taught and advised students of media studies in NYU's Gallatin School of Individualized Study and SCPS.

Ms. Kellison worked fluently as a writer, authoring or co-authoring a number of books and articles primarily in the Affective Education domain and in mathematics education reform.

Ms. Kellison was a member of the Producers Guild of America, the Writers Guild of America, the Independent Documentary Association, and won numerous industry awards, including two WGA awards for Outstanding Achievement. She lived and worked in New York City. Dustin Morrow is a filmmaker, photographer, and writer. He is also an Assistant Professor of Media Production at Temple University in Philadelphia. His short digital movies have been shown in venues around the world and won numerous awards, including an Emmy from the academic division of the Academy of Television Arts and Sciences. His photographs have been featured in a number of art and culture magazines, and in multiple solo gallery shows. A book of photographs will be completed in summer 2006. Morrow has directed theatrical productions, curated film screening series, and written extensively about film and media for various journals. During four years in Los Angeles, he edited and directed numerous music videos, short films, and commercials. He is currently finishing his first feature-length documentary, about the Irish Matchmaking Festival (visit www.matchmakermovie.com), and is developing several more projects that will shoot in Ireland in the near future. Kacey Morrow is a Tenure-Track Assistant Professor of New Media Design at Western Washington University, teaching in the Art Department with a focus on motion graphics, digital video, web and interactive design. Prior to WWU, she was a full-time lecturer at Ringling College of Art and Design in Sarasota, FL, teaching in the Graphic and Interactive Communications Department.

Attending and speaking at conferences such as, Massaging Media 2: Graphic Design Education in the Age of Dynamic Media, she stays involved in discussions about the design field. Her videos have ap...

Chapter 1 What Does a TV Producer Really Do? Chapter 2 Television: Its Past, Present, and Future Chapter 3 Script and Project Development: The Big Idea Chapter 4 Breakdowns, Budgets, and Finance: Connecting the Dots Chapter 5 Legalities and Rights: Welcome to Reality Chapter 6 Pitching and Selling the Project Chapter 7 Pre-Production: The Plan Chapter 8 Production: The Shoot Chapter 9 Post-Production: The Final Product Chapter 10 It's a Wrap! Then, Next Steps