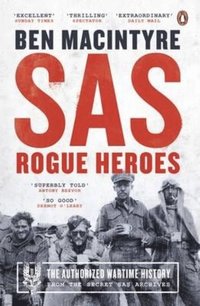 av Ben Macintyre
Häftad Engelska, 2017-06-01
105
Köp
Spara som favorit
Skickas inom 5-8 vardagar.
Gratis frakt inom Sverige över 159 kr för privatpersoner.
Finns även som
Visa alla 2 format & utgåvor
The book behind the BBC series 'SAS: Rogue Warriors' From the secret SAS archives, and acclaimed author Ben Macintyre: the first ever authorized history of the SAS In the summer of 1941, at the height of the war in the Western Desert, a bored and eccentric young officer, David Stirling, has a vision for a new kind of war: attacking the enemy where they least expect it - from behind their own lines. Despite the intense opposition of many in British High Command, Winston Churchill personally gives Stirling permission to recruit the toughest, brightest and most ruthless soldiers he can find. And so begins the most celebrated and mysterious military organisation in the world: the SAS. With unprecedented access to the SAS secret files, unseen footage and exclusive interviews with its founder members, SAS: Rogue Heroes tells the remarkable story behind an extraordinary fighting force, and the immense cost of making it a reality. 'Impeccably researched, superbly told - by far the best book on the SAS in World War II' Antony Beevor BEN MACINTYRE'S MOST RECENT BOOK AGENT SONYA IS AVAILABLE TO BUY NOW
Visa hela texten

An astonishing book * Simon Mayo * He brings his familiar mix of thrilling anecdotes, meticulous accuracy and bizarre humour to a book that should appeal to many readers beyond military history buffs. An instructive, as well as an engrossing, read * Observer Book of the Week * So good and so much more than the boys own adventure you might think it will read like. Ben is a brilliant writer * Dermot O'Leary * A wonderfully refreshing account of the origins of the regiment of balaclava-clad silent killers during the Second World War... The sharp style and sly wit reveal some pretty acute insights into the politics of the nation's favourite undercover boys * Evening Standard Books of the Year * Macintyre provides a riveting history of a revolutionary fighting force. Using unprecedented access to British Special Air Service regimental archives, Macintyre has gleaned fascinating material. A ripping good read * Washington Post 10 Best Books of 2016 * Thrilling ... An extraordinary book -- The Times Book of the Week on 'A Spy Among Friends' Meticulously researched, splendidly told, immensely entertaining and often very moving -- John le Carre on 'Agent Zigzag' A master at setting the pulse racing, Macintyre relates stories of raw courage and daring by extraordinary men -- Tony Rennell * Daily Mail * Ben Macintyre's coverage of the SAS in north Africa and, later, Italy, France and Germany, is brilliant, blending gripping narratives of fighting with descriptions of the fears of individual soldiers before battle and their reactions to its horror... Britain's martial pantheon is full of outnumbered heroes who wouldn't throw in the sponge. Henry V's band of brothers at Agincourt, the redcoats at Waterloo, the defenders of Rorke's drift, and the paras who charged at Goose Green are part of the tradition that embraces the SAS. This book explains why * Times * Excellent... accessible yet authoritative. Delivers stories of tremendous adventure and derring-do, but also offers more than straightforward military history. This book has many strengths but perhaps its greatest is how thought-provoking it is -- Laurence Rees * Sunday Times * Impeccably researched, superbly told - by far the best book on the SAS in World War II -- Antony Beevor Thorough and highly entertaining. It would be nigh on impossible to praise it too highly * Daily Express * Told with deceptive brilliance... one the finest books of its kind * Evening Standard *

Ben Macintyre is the multimillion-copy bestselling author of books including Agent Zigzag, Operation Mincemeat and A Spy Among Friends. He is a columnist and Associate Editor at The Times, and has worked as the newspaper's correspondent in New York, Paris and Washington. He regularly presents BBC series based on his acclaimed books.