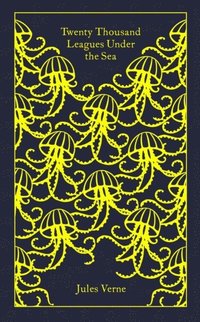 Twenty Thousand Leagues Under the Sea

av Jules Verne
Inbunden Engelska, 2017-04-27
179
Köp
Spara som favorit
Finns även som
Visa alla 8 format & utgåvor
New to Penguin Classics, the great underwater adventure story in a stunning clothbound edition with original images. In this thrilling adventure tale by the 'Father of Science Fiction', three men embark on an epic journey under the sea with the mysterious Captain Nemo aboard his submarine the Nautilus. Over the course of their fantastical voyage, they encounter the lost city of Atlantis, the South Pole and the corals of the Red Sea, and must battle countless adversaries both human and monstrous. Verne's triumphant work of the imagination shows the limitless possibilities of science and the dark depths of the human mind. This new version by award-winning translator David Coward brings Verne's novel vividly to life for a new generation of readers. Jules Gabriel Verne (1828-1905) was a French author and a pioneer of the science-fiction genre. His novels include Journey to the Centre of the Earth (1864), Twenty Thousand Leagues Under the Sea (1869-70), and Around the World in Eighty Days (1873), all available in Penguin Classics. David Coward is Emeritus Professor of French at the University of Leeds. He is the author of studies of Marcel Pagnol, Marguerite Duras, Marivaux and Restif de la Bretonne, and of a History of French Literature (2002). He has translated numerous French classics, including Moliere's plays, Simenon's novels and Albert Cohen's Belle du Seigneur, for which he was awarded the Scott-Moncrieff prize in 1996. 'We are all, in one way or another, the children of Jules Verne' - Ray Bradbury
Visa hela texten

We are all, in one way or another, the children of Jules Verne -- Ray Bradbury

Jules Verne (Author) Jules Verne was born in France in 1828 and died in 1905. His collaboration with the publisher Pierre-Jules Hetzel was wildly successful, producing many brilliant novels in the burgeoning genre of science fiction: 20,000 Leagues Under the Sea, Journey to the Centre of the Earth and Around the World in 80 Days, among others. Verne is the second most translated author in the world, after Agatha Christie and before Shakespeare. David Coward (Translator) David Coward is Emeritus Professor of French at the University of Leeds and has translated many books from French for Penguin Classics.