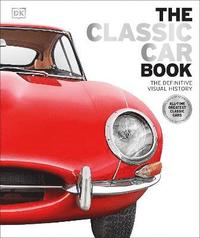 av Dk
(2 röster)
Inbunden Engelska, 2016-09-01
319
Köp
Spara som favorit
When I see an Alfa Romeo, I lift my hat. Henry Ford Few things ignite such reverence as a classic car. With more than 250 iconic models from the 1940s to the 1980s, photographed from every angle, this title is a glorious celebration of the stars in the classic car firmament. Edited by award-winning automotive journalist Giles Chapman, The Classic Car Book brings you the story of more than 20 great marques, including household names Bentley, Mercedes, Ferrari, Cadillac and Aston Martin. Its lavish photography reveals every detail in close-up of models that range from the 1940s giant two-ton Daimler DE36, which ferried royals about in style, through to sleek Ferraris from the 1980s capable of smashing the 200mph barrier. It puts you in the driving seat of such icons as the Chevrolet Corvette, the Ford Thunderbird, and the Mercedes 300SL and brings you the designers of these amazing machines and the story of their manufacturers. Whether you dream of owning one of these super-cool cars, or you are a collector already, The Classic Car Book is set to become a treasured favourite.
Visa hela texten

'Comprehensive histories of the classic car world are notoriously hard to write definitively - and even harder to get right. But Giles Chapman manages to do just that with The Classic Car Book.' -- Nat Barnes * Daily Express *

Giles Chapman is an award-winning journalist and author of more than 40 books on a wide spectrum of car subjects. Drive is the third major title he has directed for DK after the internationally successful The Car Book (2011) and The Classic Car Book (2016), bringing his knowledge of car culture, history, and industry from 35 years in the motoring media. He was editor of Classic & Sports Car, the world's best-selling classic car magazine, and since 1994 he has contributed to dozens of major newspapers and magazines. Besides his own books - which include My Dad had One Of Those, Chapman's Car Compendium, and Britain's Toy Car Wars - he has worked as an advisor to many other authors and publishers. He founded the Royal Automobile Club's Motoring Book Of The Year Award, and appears regularly on TV and radio commenting on motoring and automotive industry issues.