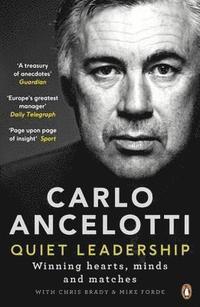 av Carlo Ancelotti
Häftad Engelska, 2017-04-06
117
Köp
Spara som favorit
Finns även som
Visa alla 2 format & utgåvor
'Steeped in glory, loved by players for his light touch, he is probably the most coveted coach in the world.' - Financial Times 'a treasury of anecdote and insight' - The Guardian 'Quiet Leadership contains page upon page of insight into his methods from Cristiano Ronaldo, Zlatan Ibrahimovic, John Terry and more'. - Sport Magazine Carlo Ancelotti is one of the greatest managers of all time, with five Champions League titles to his name. Yet his approach could not be further from the aggressive theatricals favoured by many of his rivals. His understated style has earned him the fierce loyalty of players like David Beckham, Zlatan Ibrahimovic and Cristiano Ronaldo. In Quiet Leadership, Ancelotti reveals the full, riveting story of his managerial career - his methods, mentors, mistakes and triumphs - and takes us inside the dressing room to trace the characters, challenges and decisions that have shaped him. The result is both a scintillating memoir and a rare insight into the business of leadership.
Visa hela texten

A treasury of anecdote and insight * The Guardian * He's a great coach and an amazing person -- Cristiano Ronaldo There is nobody better than this international crisis manager to explain how to handle superstar players (Cristiano Ronaldo and Gareth Bale), difficult club presidents (Silvio Berlusconi and Roman Abramovich) and hysterical media -- Simon Kuper * Financial Times * Ancelotti is Europe's greatest manager -- Paul Hayward * Telegraph * enjoyable and insightful * Financial Times Review * Steeped in glory, loved by players for his light touch, he is probably the most coveted coach in the world. * Lunch with the FT * Page upon page of insight * Sport *

Carlo Ancelotti has won football's ultimate prize, the Champions League, a record five times - twice as a player and three times as a manager. He has coached clubs including Parma, Juventus, AC Milan, Paris Saint-Germain, Real Madrid and Chelsea (winning the 'Double' in 2010). He has won titles in every country in which he has managed and is entering his first season as manager for Bayern Munich.