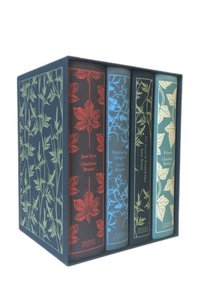 av Charlotte Bronte, Emily Bronte, Anne Bronte
(4 röster)
Mixed media product Engelska, 2016-06-30
626
Köp
Spara som favorit
Jane Eyre | Wuthering Heights | The Tenant of Wildfell Hall | Villette This stunning box set brings together the Bronte sisters' four greatest novels in beautiful Penguin editions designed by the award-winning Coralie Bickford-Smith. From the bleak moors of Wuthering Heights to the Belgian capital in Villette, and the mysterious, gloomy country estates of Jane Eyre and The Tenant of Wildfell Hall, these four novels of passion and struggle show the most famous siblings in literature at the peak of their powers.
Visa hela texten

Charlotte Bronte was born in Yorkshire in 1816. As a child, she was sent to boarding school, where two of her sisters died; she was subsequently educated at home with her younger siblings, Emily, Branwell and Anne. As an adult, Charlotte worked as a governess and taught in a school in Brussels. Jane Eyre was first published in 1847 under the pen-name Currer Bell, and was followed by Shirley (1848), Villette (1853) and The Professor (posthumously published in 1857). In 1854 Charlotte married her father's curate, Arthur Bell Nicholls. She died in March of the following year. Emily Bronte (1818-48). Best known for her only novel, Wuthering Heights, and a collection of surviving poems, she remains one of the most intensely original and passionate voices in English literature.