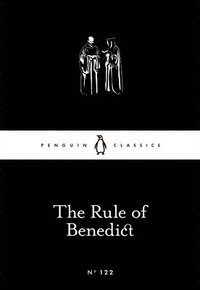 The Rule of Benedict

Häftad Engelska, 2016-03-03
34
Köp
Spara som favorit
Skickas inom 5-8 vardagar.
Gratis frakt inom Sverige över 159 kr för privatpersoner.
'Idleness is the enemy of the soul' Saint Benedict's advice to monks - on everything from correct posture to the value of silence - has offered spiritual guidance to many for fifteen centuries. One of 46 new books in the bestselling Little Black Classics series, to celebrate the first ever Penguin Classic in 1946. Each book gives readers a taste of the Classics' huge range and diversity, with works from around the world and across the centuries - including fables, decadence, heartbreak, tall tales, satire, ghosts, battles and elephants.
Visa hela texten

Saint Benedict of Nursia (c. 480 AD - 543 AD) founded twelve monasteries, the best known of which was his first monastery at Monte Cassino in Italy. Benedict wrote a set of rules governing his monks, the Rule of Saint Benedict, one of the more influential documents in Western Civilization. Benedict was canonized a saint in 1220.