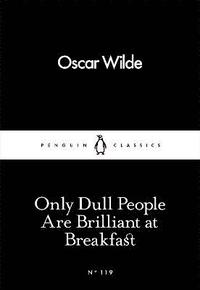 Only Dull People Are Brilliant at Breakfast

av Oscar Wilde
Häftad Engelska, 2016-03-03
34
Köp
Spara som favorit
Finns även som
Visa alla 1 format & utgåvor
'It would be unfair to expect other people to be as remarkable as oneself' Wilde's celebrated witticisms on the dangers of sincerity, duplicitous biographers, the stupidity of the English - and his own genius. One of 46 new books in the bestselling Little Black Classics series, to celebrate the first ever Penguin Classic in 1946. Each book gives readers a taste of the Classics' huge range and diversity, with works from around the world and across the centuries - including fables, decadence, heartbreak, tall tales, satire, ghosts, battles and elephants.
Visa hela texten

Born in Ireland, Oscar Fingal O'Flahertie Wills Wilde (1854-1900) was educated in Dublin & Oxford and went on to become the leading and most prominent exponent of flamboyant aestheticism. As well as his many plays, he wrote one novel, The Picture of Dorian Gray (1890), and published several volumes of poetry and criticism. He was imprisoned in 1895 for homosexual offences and after his release he died in exile in Paris.