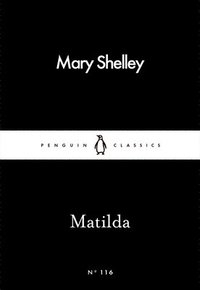 av Mary Shelley
Häftad Engelska, 2016-03-03
35
Köp
Spara som favorit
Skickas inom 7-10 vardagar.
Fri frakt inom Sverige över 159 kr för privatpersoner.
Finns även som
Visa alla 2 format & utgåvor
'I gained his secret and we were both lost for ever' Mary Shelley's dark story of a bereaved man's disturbing passion for his daughter was suppressed by her own father, and not published for over a century. One of 46 new books in the bestselling Little Black Classics series, to celebrate the first ever Penguin Classic in 1946. Each book gives readers a taste of the Classics' huge range and diversity, with works from around the world and across the centuries - including fables, decadence, heartbreak, tall tales, satire, ghosts, battles and elephants.
Visa hela texten

Mary Shelley (1797-1851), the daughter of pioneering thinkers Mary Wollstonecraft and William Godwin, eloped with the poet Percy Shelley at the age of sixteen. Three years later, during a wet summer on Lake Geneva, Shelley famously wrote her masterpiece, Frankenstein. The years of her marriage were blighted by the deaths of three of her four children, and further tragedy followed in 1822, when Percy Shelley drowned in Italy. Following his death, Mary Shelley returned to England and continued to travel and write until her own death at the age of fifty-three.