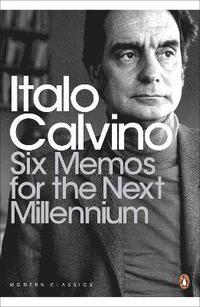 Six Memos for the Next Millennium

av Italo Calvino
Häftad Engelska, 2016-08-04
114
Köp
Spara som favorit
Finns även som
Visa alla 4 format & utgåvor
'Words connect the visible track to the invisible thing ... like a fragile makeshift bridge cast across the void' With imagination and wit, Italo Calvino sought to define the virtues of the great literature of the past in order to shape the values of the future. His effervescent last works, left unfinished at his death, were the Charles Eliot Norton lectures, which he was due to deliver at Harvard in 1985-86. These surviving drafts explore the literary concepts closest to his heart: Lightness, Quickness, Multiplicity, Exactitude and Visibility (Constancy was to be the sixth), in serious yet playful essays that reveal his debt to the comic strip and the folktale. This collection, now in a fluent and supple new translation, is a brilliant precis of a great writer whose legacy will endure through the millennium he addressed. Translated by Geoffrey Brock 'The book I give most to people is Six Memos for the Next Millennium' Ali Smith 'Wonderful . . . full of wit and erudition' Daily Telegraph
Visa hela texten

Wonderful . . . full of wit and erudition * Telegraph * A brilliant, original approach to literature, a key to Calvino's own work and a thoroughly delightful and illuminating commentary on some of the world's greatest writing * San Francisco Chronicle * A genial as well as a brilliant writer -- John Updike Calvino will continue to glitter, this strange, lonely prospector in the universe of words. . . a master in the empire of the imagination -- Ian Thomson * Independent * Reading Calvino, you're constantly assailed by the notion that he is writing down what you have always known, except that you've never thought of it before . . . he tells us, joyfully, wickedly, that there are things in the world worth loving as well as hating; and that such things exist in people, too. I can think of no finer writer to have beside me while Italy explodes, while Britain burns, while the world ends. -- Salman Rushdie No-one can read Angela Carter or David Mitchell without thinking of Calvino. Salman Rushdie is enthusiastic in his naming of Calvino as a major influence on his work, as am I. -- Jeanette Winterson Rich and deeply satisfying ... this is very much a book that sets you off thinking ... there is a universe in here -- Nick Lezard * Guardian *

Italo Calvino, one of Italy's finest postwar writers, has delighted readers around the world with his deceptively simple, fable-like stories. Calvino was born in Cuba in 1923 and raised in San Remo, Italy; he fought for the Italian Resistance from 1943-45. His major works include Cosmicomics (1968), Invisible Cities (1972), and If on a winter's night a traveler (1979). He died in Siena in 1985, of a brain hemorrhage.