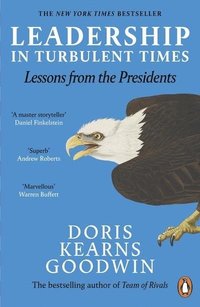 Lessons from the Presidents

av Doris Kearns Goodwin
Häftad Engelska, 2019-06-06
139
Köp
Spara som favorit
Skickas inom 5-8 vardagar.
Fri frakt inom Sverige över 159 kr för privatpersoner.
Finns även som
Visa alla 1 format & utgåvor
In this culmination of five decades of acclaimed studies in presidential history, Doris Kearns Goodwin offers an illuminating exploration of the origin, uncertain growth, and finally, the exercise of fully developed leadership. Are leaders born or made? Where does ambition come from? How does adversity affect the growth of leadership? Does the man make the times or does the times make the man? In Leadership Goodwin draws upon four of the presidents she has studied - Abraham Lincoln, Theodore Roosevelt, Franklin D. Roosevelt and Lyndon B. Johnson - to show how they first recognized leadership qualities within themselves, and were recognized as leaders by others. By looking back to their first entry into public life, when their paths were filled with confusion, hope, and fear, we can share their struggles and follow their development into leaders. Leadership tells the story of how they all collided with dramatic reversals that disrupted their lives and threatened to forever shatter their ambitions. Nonetheless, they all emerged fitted to confront the contours and dilemmas of their times. No common pattern describes the trajectory of leadership. Although set apart in background, abilities and temperament, they shared a fierce ambition, a hunger to succeed beyond expectations. All four, at their best, were guided by a sense of moral purpose that led them at moments of great challenge to summon their talents to enlarge the opportunities and lives of others. This seminal work provides a roadmap for aspiring and established leaders. In today's polarized world, these stories of authentic leadership in time of surpassing fracture and fear take on a singular urgency. (Previously published as: 'Leadership: Lessons from the Presidents for Turbulent Times')
Visa hela texten

A fabulously engrossing, exciting narrative in the grand old style ... overflowing with colour and character -- Dominic Sandbrook on 'Team of Rivals' Full of life and colour * Sunday Times Best Politics Books of 2018 * Riveting . . . Goodwin appraises in illuminating detail -- Hettie OBrien * Prospect Magazine * She is the most fluent, most wide-ranging of modern presidential chroniclers . . . compelling. There is much in Leadership that offers lessons, even consolations that apply universally. Kearns Goodwin shows they offer lessons that can be embraced by the businessman, the aspiring politician and the striving individual * The Herald * She writes easily and attractively; the reader is carried along effortlessly with the narrative sweep of her prose . . . engrossing . . . it is impossible not to admire the skill with which Goodwin tells four absolutely riveting stories -- Alan Ryan * New Statesman * Leadership should help us raise our expectations of our national leaders, our country and ourselves -- Tim Kaine * The Washington Post * Pulitzer Prize-winning author Doris Kearns Goodwin demonstrates how leaders are made, not born, as she thoughtfully explores the highs and lows of four U.S. presidents who faced moments of horrific national crisis. Goodwin's clean, assured sentences set the stage as each future president discovers within himself the desire to enter politics, the calamitous blows that knocked each one down, and how they tackled the struggles that tore at the sinews of the country. Most fascinating is Goodwin's revelations about how very differently Abraham Lincoln, Theodore Roosevelt, Franklin D. Roosevelt, and Lyndon B. Johnson approached not only their political careers but how they developed the character traits that helped them see-or make-a path toward a critical response that many others disagreed with. Lincoln's delivery of the Emancipation Proclamation, Theodore Roosevelt's handling of labor strikes, FDR's battle against the Great Depression in his first 100 days, and Johnson's prioritization of civil rights while a nation mourned were actions that could have ripped the country further apart but eventually bound it together and strengthened its democratic foundations. The rare weakness within Leadership: In Turbulent Times is the outlining of specific qualities, such as "Take the measure of the man" and "Set a deadline and drive full-bore to meet it," that are meant to distill leadership wisdom into bullet points, like contemporary business books. Goodwin's strength is in the rich context she provides as she shows that great leaders develop in dissimilar ways but ultimately have a vision they reach for and rely on when times are at their most turbulent. * Adrian Liang, Amazon Book Review (An Amazon.com Best Book of September 2018) * An inspiring guide to the very best of human endeavour - a book filled with well-told stories and lessons * Henry Mance, Political correspondent, Financial Times * Remarkable ... comprehensive, human, and engaging, clearly the results of long study. * Publishers Weekly, starred review * Pulitzer- and Carnegie Medal-winning historian Goodwin draws on 50 years of scholarship in this strong and resonant addition to the literature of the presidency . . . extremely relevant * Booklist * A timely study of what makes a great President . . . Few are better placed to explain the current vacuum, and predict what might fill it, than Doris Kearns Goodwin. The 75-year-old swam with Lyndon Johnson at his ranch, worked with Steven Spielberg on Lincoln and dined with Barack Obama at the White House. It is not, as the title implies, an opportunistic entry into the ever-expanding Trump canon. She began work on it five years ago . . . She considers what lessons they offer for transformational crisis management, turnaround and visionary leadership, but sugars the pill with telling details and funny anecdotes -- David Smith * The Guardian * It is to Goodwin's credit that she t

Doris Kearns Goodwin is the author of the runaway bestseller Team of Rivals: The Political Genius of Abraham Lincoln. She won the Pulitzer Prize in history for No Ordinary Time: Franklin and Eleanor Roosevelt: The Home Front in World War II and is also the author of the bestsellers Wait Till Next Year, The Fitzgeralds and the Kennedys, and Lyndon Johnson and the American Dream.