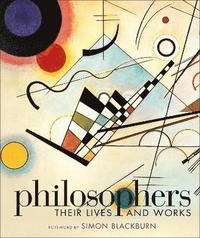 Philosophers: Their Lives and Works

av Dk
Inbunden Engelska, 2019-09-05
259
Köp
Spara som favorit
Skickas inom 3-6 vardagar.
Fri frakt inom Sverige för privatpersoner.
Finns även som
Visa alla 1 format & utgåvor
An illuminating celebration of more than 80 of the world's most important thinkers, this book explores the fascinating stories of their lives, their loves, and their pioneering ideas. Introduced with a stunning portrait of each featured philosopher, entries trace the ideas and beliefs, and the relationships and rivalries that inspired the great thinkers and influenced their work, providing revealing insights into what drove them to question the meaning of life and come up with new ways of understanding the world. Lavishly illustrated with photographs and paintings of philosophers, their homes, friends, studies, and their personal belongings, together with pages from original manuscripts, first editions, and correspondence, this book introduces the key ideas, themes, and working methods of each featured individual, setting their ideas within a wider historical and cultural context. Charting the development of ideas across the centuries in both the East and West, from ancient Chinese philosophy to the work of contemporary thinkers, Philosophers provides a compelling glimpse into the personal lives, loves, and influences of the great philosophers as they probed into life's "big ideas".
Visa hela texten

Simon Blackburn is a Fellow of Trinity College, Cambridge, the Emeritus Bertrand Russell Professor of Philosophy at the University of Cambridge, and the author of many books, including the best-selling Oxford Dictionary of Philosophy (1994), Think (1999), and Being Good: A Short Introduction to Ethics (2001). These have sold well over 150,000 copies in English and are translated into more than 20 languages. OUP also published Lust, his contribution to their Seven Deadly Sins series, in 2005. He was a Fellow and Tutor at Pembroke College, Oxford, from 1969 to 1989, and from 1990 to 2000 an Edna J. Koury Distinguished Professor of Philosophy at the University of North Carolina, Chapel Hill. He edited the journal Mind from 1984 to 1990.