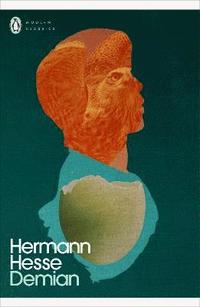 av Hermann Hesse
(1 röst)
Häftad Engelska, 2017-09-07
114
Köp
Spara som favorit
Skickas inom 3-6 vardagar.
Fri frakt inom Sverige för privatpersoner.
Finns även som
Visa alla 8 format & utgåvor
Demian is a coming-of-age story that follows a young boy's maturation as he grapples with good and evil, lightness and darkness, and forges alternatives to the ever-present corruption and suffering that he sees all around him. Crucial to this development are his relationships with a series of older mentors, of who the titular Demian is the most charismatic, otherworldly and ultimately influential. Many have noted the influence of Jungian psychology upon this novel and it is fascinating to see Herman Hesse's interests in the self, existence and free will play out through through the lens of early twentieth-century Europe; Christian imagery and themes are ever-present, as is the shadow of the First World War.
Visa hela texten

One can neither date nor doubt the sincerity of the hero s search for satisfaction or the quality of the spirit that lies behind it -- Times Literary Supplement Beautifully written, it has a seriousness as compelling as as that of The Waste Land . . . the work of a major writer * Observer * Hesse is not a traditional teller of tales but a novelist of ideas and a moralist of a high order...The autobiographical undercurrent gives Demian an Existentialist intensity and a depth of understanding that are rare in contemporary fiction. * Saturday Review *

Hermann Hesse was born in Calw, Germany, in 1877. After a short period at a seminary he moved to Switzerland to work as a bookseller. During the First World War he worked for the Red Cross. His later novels - most importantly Siddhartha (1922), Steppenwolf (1927), Narcissus und Goldmund (1930) and The Glass Bead Game (1943) - and his poems and critical essays established him as one of the towering literary figures of the German-speaking world. He won many literary awards including the Nobel Prize for Literature in 1946. Hermann Hesse died in 1962.