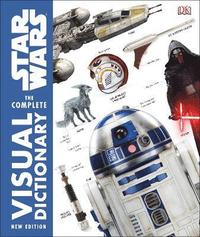 Star Wars: The Complete Visual Dictionary takes us beyond the galaxy far, far away to discover the wealth of the Star Wars universe. * Future of the Force *

Pablo Hidalgo has been writing professionally about Star Wars since 1995. In 2000, he joined Lucasfilm to become a full-time Star Wars authority, first as a StarWars.com writer, and now as a creative executive in story development. Dr. David West Reynolds earned his PhD in archeology at the University of Michigan. A lecturer, veteran of field expeditions on three continents, and author of scientific archeological publications, Reynolds has also written five Star Wars books. James Luceno is the best-selling author of Dark Lord: The Rise of Darth Vader, among many others. Ryder Windham is the author of more than 60 Star Wars titles. Jason Fry has written or co-written more than 30 novels, short stories, and other works set in the galaxy far, far away.