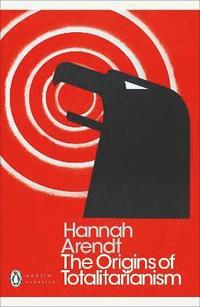 The Origins of Totalitarianism

av Hannah Arendt
(2 röster)
Häftad Engelska, 2017-04-06
110
Köp
Spara som favorit
Finns även som
Visa alla 8 format & utgåvor
'How could such a book speak so powerfully to our present moment? The short answer is that we, too, live in dark times' Washington Post Hannah Arendt's chilling analysis of the conditions that led to the Nazi and Soviet totalitarian regimes is a warning from history about the fragility of freedom, exploring how propaganda, scapegoats, terror and political isolation all aided the slide towards total domination. 'A non-fiction bookend to Nineteen Eighty-Four' The New York Times 'The political theorist who wrote about the Nazis and the 'banality of evil' has become a surprise bestseller' Guardian
Visa hela texten

A kind of nonfiction bookend to Nineteen Eighty-Four * The New York Times * How could such a book speak so powerfully to our present moment? The short answer is that we, too, live in dark times, even if they are different and perhaps less dark, and Origins raises a set of fundamental questions about how tyranny can arise and the dangerous forms of inhumanity to which it can lead * Washington Post * Perhaps Arendt's most profound legacy is in establishing that one has to consider oneself political as part of the human condition. What are your political acts, and what politics do they serve? -- Zoe Williams * Guardian * Her masterpiece ... Arendt's inquiry into the elements of totalitarian domination teaches us we must never let go of the fear of totalitarian government * Los Angeles Review of Books * A vivid account of the system of concentration and death camps that Arendt believed defined totalitarian rule -- Jeffrey C. Isaac * The Washington Post * Remarkable for us, no doubt, is Arendt's conviction that only philosophy could have saved those millions of lives -- Judith Butler * Guardian * Her greatest work is this 1951 classic ... More than any thinker it was Hannah Arendt who identified how those movements of ideas, racial theories, people and methods take place, showing how they fused with other forces - most notably European antisemitism - to shape and ultimately disfigure the twentieth century -- David Olusoga * Guardian *

Hannah Arendt was born in Hanover, Germany, in 1906, and received her doctorate in philosophy from the University of Heidelberg. In 1933, she was briefly imprisoned by the Gestapo, after which she fled Germany for Paris, where she worked on behalf of Jewish refugee children. In 1937, she was stripped of her German citizenship, and in 1941 she left France for the United States. Her many books include The Origins of Totalitarianism (1951), The Human Condition (1958) and Eichmann in Jerusalem (1963), in which she coined the famous phrase 'the banality of evil'. She died in 1975.