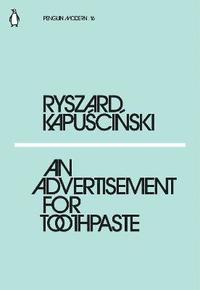 An Advertisement for Toothpaste

Bloggat om An Advertisement for Toothpaste

Ryszard Kapuscinski (Author) Ryszard Kapuscinski was born in Poland in 1932. As a foreign correspondent for PAP, the Polish news agency, until 1981 he was an eyewitness to revolutions and civil wars in Africa, Asia and Latin America. His books include The Shadow of the Sun, The Emperor, Shah of Shahs, Another Day of Life and Travels with Herodotus. He won dozens of major literary prizes all over the world, and was made 'journalist of the century' in Poland. He died in January 2007.