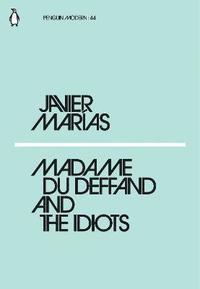 Madame du Deffand and the Idiots

Javier Marias is the author of sixteen works in Spanish, which have been translated into forty-five languages including English. His translated English works are All Souls, A Heart So White, Tomorrow in the Battle Think on Me, When I Was Mortal, Dark Back of Time, The Man of Feeling, Voyage Along the Horizon, Written Lives, the Your Face Tomorrow trilogy (Fever and Spear, Dance and Dream and Poison, Shadow and Farewell), Bad Nature, While the Women Are Sleeping, The Infatuations, Thus Bad Begins and, Venice, An Interior. Javier Marias has received numerous literary prizes including the International IMPAC Dublin Literary Award and the Prix Formentor. He lives and works as a translator and columnist in Madrid.