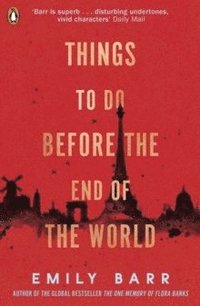 Things to do Before the End of the World

av Emily Barr
(1 röst)
Häftad Engelska, 2021-05-13
12-15 år
89
Köp
Spara som favorit
Finns även som
Visa alla 1 format & utgåvor
Timely and powerful; the new coming-of-age thriller from the bestselling author of The One Memory of Flora Banks. 1. Live your best life. 2. Uncover family secrets. 3. Trust no one What would you do when you hear the news that humans have done such damage to the earth that there might only be a limited amount of safe air left - a year's worth at most? You'd work through your bucket list, heal rifts, do everything you've never been brave enough to do before? Olivia is struggling to do any of this. What it is she truly wants to do? Who do she wants to be? Then out of the blue comes contact from a long-lost cousin Olivia didn't even know existed. Natasha is everything Olivia wants to be and more. And as the girls meet up for a long, hot last summer, Olivia finds Natasha's ease and self-confidence having an effect on her. But Natasha definitely isn't everything she first appears to be . . . I walked home. I kept hearing footsteps behind me, but every time I turned around, no one was there.
Visa hela texten

THE ONE MEMORY OF FLORA BANKS published in 2017 was Emily Barr's first novel for young adults and was a global hit, publishing in 27 languages. Before that, she worked as a journalist in London but always hankered after a quiet room and a book to write. She went travelling for a year, which gave her an idea for a novel set in the world of backpackers in Asia. This became BACKPACK, an adult thriller which won the WH Smith New Talent Award, and she has since written eleven more adult novels published in the UK and around the world. She lives in Cornwall with her husband and their children.