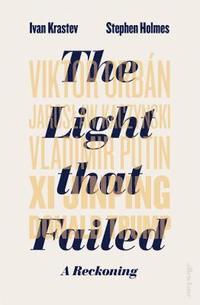 The Light that Failed

av Ivan Krastev, Stephen Holmes
Inbunden Engelska, 2019-10-31
219
Bevaka
Spara som favorit
Tillfälligt slut – klicka "Bevaka" för att få ett mejl så fort boken går att köpa igen.
Finns även som
Visa alla 2 format & utgåvor
FINANCIAL TIMES, ECONOMIST, PROSPECT and EVENING STANDARD BOOKS OF THE YEAR 2019 *Winner of the 2020 Lionel Gelber Prize* A landmark book that completely transforms our understanding of the crisis of liberalism, from two pre-eminent intellectuals Why did the West, after winning the Cold War, lose its political balance? In the early 1990s, hopes for the eastward spread of liberal democracy were high. And yet the transformation of Eastern European countries gave rise to a bitter repudiation of liberalism itself, not only there but also back in the heartland of the West. In this brilliant work of political psychology, Ivan Krastev and Stephen Holmes argue that the supposed end of history turned out to be only the beginning of an Age of Imitation. Reckoning with the history of the last thirty years, they show that the most powerful force behind the wave of populist xenophobia that began in Eastern Europe stems from resentment at the post-1989 imperative to become Westernized. Through this prism, the Trump revolution represents an ironic fulfillment of the promise that the nations exiting from communist rule would come to resemble the United States. In a strange twist, Trump has elevated Putin's Russia and Orban's Hungary into models for the United States. Written by two pre-eminent intellectuals bridging the East/West divide, The Light that Failed is a landmark book that sheds light on the extraordinary history of our Age of Imitation.
Visa hela texten

Krastev is always what the English call good value, and his perspective here on the differences between the parodic Russian response to our newly victorious West and the "imitation" of Eastern Europe is devious, plausible, and amusing -- Michael Hofmann * Paris Review * This is a book about copying that makes an original argument. In doing so, it reminds us that liberal democracy depends not on mechanical processes but on human originality -- Timothy Snyder A bracing analysis of post-Cold War politics, upending cherished assumptions and forcing us to look afresh at the complex dialectic of liberalism and illiberalism -- George Soros This is a book about imitation by a couple of utterly inimitable authors. It is the most original explanation I've read of the self-destruction of the liberal West as universal utopia. Its analysis is rooted in an unparalleled understanding of the resentment fuelled revolt (and revolting resentment) of political elites who sought to ape the West, and ended up loathing it for that very reason. Scathing yet fair -- Peter Pomerantsev, author of Nothing Is True and Everything Is Possible Witty, incisive, devastating: an unforgettable analysis of why the light of liberalism failed in Eastern Europe, and why resentment towards imitation of the West has fueled the furies of the populist revolt -- Michael Ignatieff, President of Central European University, Budapest An unflinchingly honest explanation of what has gone wrong in the west - and the east - since 1989 * Financial Times * Compelling and witty * Prospect Books of the Year * Sharp, polemical and ideas-packed * Economist * Justly acclaimed -- Gideon Rachman * Financial Times Books of the Year * An important book that fizzes with ideas. . . There is a smart insight or elegant paradox on almost every page. . . This book poses in stark terms the dilemma for those who took for granted the ideas that created the postwar western world * The Sunday Times * If you read one book to understand the state of the world today, make it this one. Aphoristic, counter-intuitive and amusing, a single page provides more insight into populism than libraries of books on Brexit or Trump. . . Extraordinary and compelling. . . Its subject matter is bleak but the deep learning, humour and humanity of its authors shines through -- Mark Leonard * Prospect * A brilliant explanation of the mess we are in now ... written with wonderfully dry wit * Evening Standard Books of the Year * A brilliant, original book on the crisis of modern liberalism ... a must read to understand our present discontents -- Lionel Barber * Financial Times Books of the Year *

Ivan Krastev is a fellow at the Institute for Human Sciences in Vienna, a contributing opinion writer for the International New York Times and, most recently, the author of the widely acclaimed After Europe. Stephen Holmes is Professor of Law at NYU School of Law and the author of many books on liberalism.