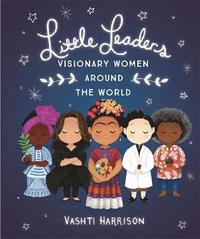 av Vashti Harrison
Häftad Engelska, 2020-07-23
3-6 år
89
Köp
Spara som favorit
Finns även som
Visa alla 1 format & utgåvor
Meet the little leaders. They're brave. They're bold. They changed the world. Featuring the true stories of 40 inspirational women creators - from writers to inventors, artists to scientists - this book is as inspirational as it is educational. Readers will meet trailblazing women such as revolutionary architect, Zaha Hadid, actor/inventor Hedy Lamarr, environmental activist Wangari Maathai, modernist painter and animator Mary Blair and physicist Chien-Shiung Wu. Some names will be familiar, some will not - but all these women had a lasting impact on their fields.
Visa hela texten

Vashti Harrison earned her MFA in Film/Video from CalArts and BA from the University of Virginia. Her experimental films and documentaries have shown around the world at film festivals. After a brief stint in television as a production coordinator, she is now a freelance graphic designer and a picture-book illustrator. She lives in Brooklyn, New York, USA.