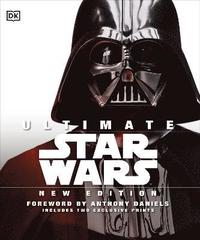 The Definitive Guide to the Star Wars Universe

Adam Bray is writing the updates for this new edition. Adam is the author of DK's Star Wars: The Visual Encylopedia, Star Wars: What Makes a Monster, Star Wars Rebels: The Visual Guide, Marvel Studios Visual Dictionary, Marvel Studios Character Encyclopedia, and a co-author of Ultimate Marvel and Star Wars: Absolutely Everything You Need To Know. Adam is also a contributor to the StarWars.com blog. Cole Horton is an author, historian, and games industry professional. He is the author of multiple Star Wars books, including Star Wars Maker Lab, Star Wars Absolutely Everything You Need to Know and Star Wars The Visual Encyclopedia. Cole graduated with a degree in History from Indiana University and has contributed as a historian to StarWars.com, Marvel AR, and Marvel.com. By day, he works on Star Wars games at EA and lives in San Francisco, CA with his wife. Daniel Wallace is a comic book expert, sci-fi sage, and lifelong geek. Author or co-author of more than two dozen books, including Star Wars: Battles for the Galaxy, Batman: The World of the Dark Knight, and the New York Times' bestseller Star Wars: The New Essential Guide to Characters, his specialty is exploring the underpinnings of popular fictional universes. Ryder Windham is the author and co-author of more than 70 Star Wars books, including DK's Star Wars: The Ultimate Visual Guide and Star Wars Year by Year: A Visual Chronicle. An avid blood donor, he has helped organise blood drives with Star Wars fans around the world. Tricia Barr is a prominent blogger and podcaster who has been sharing her passion for Star Wars ever since cosplaying Princess Leia in 1977. She regularly contributes feature articles for Star Wars Insider and authored the award-winning space-opera novel Wynde. For DK she has co-authored Star Wars: The Visual Encyclopedia.