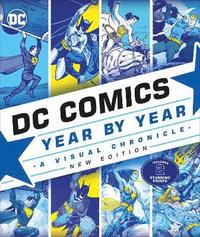 Alan Cowsill started out as a comic dealer before becoming a writer and editor. He co-created Stormwatcher for Acme/Eclipse before working on Panini UK's Marvel line, writing the first UK-originated Spider-Man strips for over a decade. He also created the award-winning Classic Marvel Figurine Collection and DC Super Hero Collection for Eaglemoss Publications and is the author of Colin the Goblin, published by Egmont Books. Matthew Manning has written numerous comics for a variety of publishers, including Marvel and DC. His work has appeared in the pages of The Batman Strikes!, Legion of Super-Heroes in the 31st Century, Justice League Adventures, Spider-Man Unlimited, Looney Tunes, and Marvel Romance Redux. For DK, he has penned Wolverine: Inside the World of the Living Weapon, the updated versions of Spider-Man: The Ultimate Guide and Hulk: The Incredible Guide, the children's reader Marvel Heroes: Greatest Battles, and contributed to Marvel Chronicle. Manning currently resides in Brooklyn with his wife Dorothy, and a collection of comics much too large for any normal-size apartment.