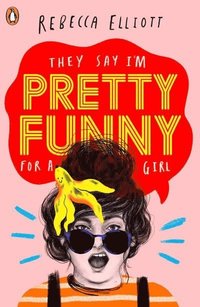 av Rebecca Elliott
Häftad Engelska, 2020-03-17
9-12 år
107
Köp
Spara som favorit
Skickas inom 7-10 vardagar.
Fri frakt inom Sverige över 159 kr för privatpersoner.
Finns även som
Visa alla 2 format & utgåvor
"This book is filled with loveable characters, witty dialogue and proper LOLS which made recording the audiobook hard - because I kept giggling!" Sharon Rooney Does anyone ever really want to 'fall' in love? Knowing me I'll just trip over it and graze my knee on the gravel of humiliation. Haylah Swinton is fairly confident she's brilliant at being a girl. She's an ace best friend, a loving daughter, and an INCREDIBLY patient sister to her four-year-old total nutter of a brother, Noah. But she has a secret. She wants to be a stand-up comedian, but she's pretty sure girls like her - big girls, girls who don't get all the boys, girls who a lot of people don't see - don't belong on stage. That hasn't stopped her dreaming though, and when the seemingly perfect opportunity to write routines for older, cooler, impossibly funny Leo arises . . . well, what's a girl to do? But is Leo quite an interested in helping Haylah as he says he is? Will Haylah ever find the courage to step into the spotlight herself? And when oh when will people stop telling her she's 'funny for a girl'?!
Visa hela texten

Elliott writes teenagers well, refraining from trying to use any slang . . . and just focusing on the issues that seem to come up for all teenagers, no matter what new tech is added to their life. It's also so refreshing to read about a young woman with ambition and passion that is not, say, a vampire/werewolf love interest . . . [Haylah] is a realistic character I believe plenty of teenagers would identify with . . . I wish this book had been written when I was a teenager! * Funny Women * In Haylah Swinton, Rebecca Elliott has created a funny, vulnerable, relatable teenager . . . This book is jam-packed with heart and humour, meaning you'll fly through the pages to see what happens to Haylah. Featuring perfect female friendships and jam-packed with laugh-out-loud moments, this is a brilliant debut. * Askew & Holts *

When Rebecca was six, she precociously pronounced that she wanted to be 'an artist and a writer'. After a 'brief' detour from this career plan involving wanting to be Stephen Fry, a degree in philosophy and a dull office job, she fulfilled her dream in 2001 when she became a full time children's book illustrator. Ultimately proving, if nothing else, that once her mind is made up she really can't be bothered to change it. Since then she has become an award-winning and bestselling author of over 30 books for children, including her ongoing series Owl Diaries which has sold over 6 million copies worldwide. If she's not story-making Rebecca can be found reading, podcasting with her comedian best friend, drumming or singing in her band, making something (normally a mess), or just hanging out in sunny Suffolk with her gorgeous children, permanently frantic dog Frida and sarcastic cat Bernard.