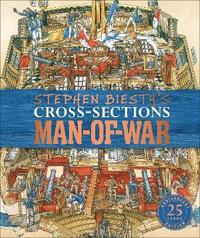 av Richard Platt
Inbunden Engelska, 2019-08-01
6-9 år
179
Köp
Spara som favorit
Skickas inom 5-8 vardagar.
Gratis frakt inom Sverige över 159 kr för privatpersoner.
Finns även som
Visa alla 3 format & utgåvor
Look inside an 18th-century warship as it sails into battle on the high seas. Packed with extraordinary illustrations, this history book for children covers everything from warship design to navigation. Biesty's incredible drawings slice through a man-of-war to explore every corner, from the crow's nest to the stinking hold. Packed with fascinating facts and gory details, the pages teem with sailors busy about their duties. Find out how gun crews fired a cannon, examine a surgeon's toolkit, and learn the best way to wriggle the maggots out of the ship's biscuits. Look out, too, for the stowaway on every page. He's the one with spiky hair and there's a reward for his capture! This absorbing book will have children - and adults - poring over every page. Celebrating its 25th anniversary, Stephen Biesty's Cross-Sections Man-of-War remains as entertaining as ever.
Visa hela texten

Stephen Biesty is a world-renowned British illustrator. He made his name in the 1990s for his best-selling 'Incredible Cross-Section' books published by Dorling Kindersley, which have topped global sales of 3.5 million and have been printed in 16 languages. He has won several prestigious prizes including 'The New York Times Best Illustrated Book Award' in 1993, and 'The UK Literary Association Children's Book Award' 2004. Stephen has created illustrations for high-profile architectural projects, such as the Millennium Dome in 1999 and the redevelopment of the Royal Opera House in 2000. He has also worked on digital media projects such as an animated film for an exhibition at Tower Bridge in 2009, and a website for the USS Constitution Museum in Boston in 2010 to celebrate the bicentenary of this famous American warship.