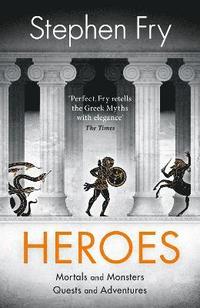 The myths of the Ancient Greek heroes retold

av Stephen Fry
(1 röst)
Inbunden Engelska, 2018-11-01
199
Köp
Spara som favorit
Finns även som
Visa alla 4 format & utgåvor
IMAGINE SANDALS ON YOUR FEET, A SWORD IN YOUR HAND, HOT SUN BEATING DOWN ON YOUR BRONZE HELMET. ENTER THE WORLD OF STEPHEN FRY'S SUNDAY TIMES BESTSELLER, HEROES In this companion to his bestselling Mythos, Stephen Fry gloriously retells the epic myths of the Greek heroes - which will be loved by young and old alike. 'An odyssey through Greek mythology. Brilliant . . . all hail Stephen Fry' Daily Mail ___________ Few mere mortals have ever embarked on such bold and heart-stirring adventures, overcome myriad monstrous perils, or outwitted scheming vengeful gods, quite as stylishly and triumphantly as Greek heroes. In this companion to his bestselling Mythos, Stephen Fry brilliantly retells these dramatic, funny, tragic and timeless tales. Join Jason aboard the Argo as he quests for the Golden Fleece. See Atalanta - who was raised by bears - outrun any man before being tricked with golden apples. Witness wily Oedipus solve the riddle of the Sphinx and discover how Bellerophon captures the winged horse Pegasus to help him slay the monster Chimera. Filled with white-knuckle chases and battles, impossible puzzles and riddles, acts of base cowardice and real bravery, not to mention murders and selfless sacrifices, Heroes is the story of what we mortals are truly capable of - at our worst and our very best. 'A romp through the lives of ancient Greek gods. Fry is at his story-telling best . . . the gods will be pleased' Times 'Assured and engaging. The pace is lively, the jokes are genuinely funny' Guardian 'An Olympian feat. The gods seem to be smiling on Fry - his myths are definitely a hit' Evening Standard 'Just as delightful and difficult to put down as the first. Heroes makes the stories relatable without skimping on the gory details, or sacrificing the truths of the myth. It's rich, it's funny and you'll feel like you've learned a lot' Herald ___________ If you like the sound of Heroes, you'll love Mythos - Fry's first foray into the enthralling world of Greek mythology. Praise for Mythos: 'Ebullient and funny' Times 'Entertaining and edifying' Daily Telegraph 'A rollicking good read' Independent 'The Greek gods of the past become relatable as pop culture, modern literature and music are woven throughout. Joyfully informal yet full of the literary legacy' Guardian
Visa hela texten

This is a spirited retelling of stories that Fry clearly knows and loves * The Times * Assured and engaging. The pace is lively, the jokes are genuinely funny, and Fry once again proves himself a master of great learning worn lightly * Guardian * Here, indeed, be monsters, myriad adventures and machinating gods. Fry is a personable and passionate narrator * Mail on Sunday * Just as delightful and difficult to put down as the first. Heroes makes the stories relatable without skimping on the gory details, or sacrificing the truths of the myth. It's rich, it's funny and you'll feel like you've learned a lot * Herald * Fry brilliantly retells the dramatic, funny, tragic and timeless tales of these heroic men and women in all their grit and glory. Filled with white-knuckle chases and twisted labyrinths, impossible puzzles and blood-curdling monsters * Northern Ireland Homes & Lifestyle * Just as delightful and difficult to put down as the first. It makes stories relatable without skimping on the gory details * Sunday Life * Rich, funny and you'll feel like you've learned a lot along the way * Eastern Daily Press * Tales of fatal flaws, perilous journeys and shining acts of heroism are told with gusto and young and old will be engrossed. The audiobook is an absolute gem too, read by the author who has a winning way of bringing these epic tales to life * Western Morning News * Joyfully informal yet full of the literary legacy. The Greek gods of the past become relatable * Guardian (on 'Mythos') * The best thing he's written since his superb first novel . . . entertaining and edifying * Telegraph (on 'Mythos') * A rollicking good read * Independent (on 'Mythos') * Perfect for the 21st Century. Ebullient, funny, Fry retells the Greek myths with elegance * The Times (on 'Mythos') * A wondrous new immersion in ancient stories we only thought we knew. Brilliant, funny, erudite, inventive, surprising and enthralling -- Richard North Patterson (on 'Mythos') Fry makes the stories relatable without skimping on the wonderful gory details, or sacrificing the traditional truths of the myth * i (The paper for today) * Stephen Fry has created a magnificent book. Humorous, but with serious stories told with wit and erudition. This is a book that will delight readers of all ages. Fry's writing is never less than delightful * Moorlander * Fry is a natural storyteller and his lively retellings make for an entertaining read * Hannah Beckerman, Observer * The comedian and polymath retells age-old Greek myths in dramatic, modernised style * i * One of the nation's favourite intellectuals retells the epic myths of the Greek heroes in his own unique and very enjoyable way * Cambridge Independent * Arguably the greatest living Englishman * Indendent on Sunday * The patron saint of British intelligence * Daily Telegraph * National Treasure: noun - someone or something regarded as emblematic of a nation's cultural heritage, such as Stephen Fry * Oxford English Dictionary *

Stephen Fry is an award-winning comedian, actor, presenter and director. He rose to fame alongside Hugh Laurie in A Bit of Fry and Laurie (which he co-wrote with Laurie) and Jeeves and Wooster, and was unforgettable as General Melchett in Blackadder. He has hosted over 180 episodes of QI, and has narrated all seven of the Harry Potter novels for the audiobook recordings. He is the bestselling author of four novels - The Liar, The Hippopotamus, Making History and The Stars' Tennis Balls - as well as three volumes of autobiography - Moab is My Washpot, The Fry Chronicles and More Fool Me. Mythos, Heroes and Troy, his retelling of the Greek myths, are all Sunday Times bestsellers.