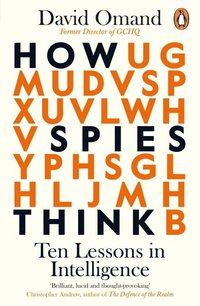 av David Omand
Häftad Engelska, 2021-07-01
129
Köp
Spara som favorit
Finns även som
Visa alla 2 format & utgåvor
LONGLISTED FOR THE ORWELL PRIZE FOR POLITICAL WRITING 2021 'One of the best books ever written about intelligence analysis and its long-term lessons' Christopher Andrew, author of The Defence of the Realm: The Authorized History of MI5 'An invaluable guide to avoiding self-deception and fake news' Melanie Phillips, The Times From the former director of GCHQ, Professor Sir David Omand, learn the methodology used by British intelligence agencies to reach judgements, establish the right level of confidence and act decisively. Full of revealing examples from a storied career, including key briefings with Prime Ministers and strategies used in conflicts from the Cold War to the present, in How Spies Think Professor Omand arms us with the tools to sort fact from fiction, and shows us how to use real intelligence every day.
Visa hela texten

'How Spies Think is a master-class in miniature form, offering the enduring lessons of a consequential life in service as keys to success in any profession facing the challenges and opportunities of an uncertain future' -- Chris Inglis, former Deputy Director of the NSA 'A fascinating book about how to think. Not just about intelligence but also about disinformation, distortion, subversion and all the other perils of a digital age. There cannot be anybody in Britain who can match David Omand's broad experience in seeking, assessing and using secret intelligence. This personal experience produces his careful and thorough analytical rules' 'Professor Sir David Omand deconstructs then reconstructs an important mode of thinking, spy thought, for those of us who deal with strategy, information, misinformation, and disinformation. He leaves the reader with a powerful framework to help us face the realpolitik of the world' -- Professor Michael Mainelli, Alderman & Sheriff of the City of London 'A brilliant book, by one of the UK's true polymaths - author, academic, administrator, mathematician - and former spy. But this isn't just a book for those interested in the secret world of MI5, MI6, and GCHQ; it's for anyone wanting to know how to make better decisions, and avoid the traps into which businesses, and governments can and do fall, time after time' -- Rt Hon Jack Straw, former Home Secretary, Foreign Secretary, and Lord Chancellor 'A tour de force. David Omand equips the reader with powerful intelligence techniques to survive in the new digital age. He lightens it with a fascinating selection of anecdotes, some firsthand, to illustrate his themes. And he makes an overwhelming case for rationality as the best response to a world of fake news and cyberattacks. Essential reading' -- Richard Wilson, former Head of the Home Civil Service 'With today's political reality trumping political fiction, we rely now for mystery on the world of spies, espionage and secret intelligence. In this fascinating and revealing book David Omand, after a lifetime in that shadowy world, pulls back the curtain on spying triumphs, the occasional disasters but also the important lessons for all of us from these dark but essential arts. It is a true eye-opener on a world which outsiders only guess about' -- Lord George Robertson, former UK Defence Secretary and Secretary General of NATO 'Britain's spooks are world-renowned. This brilliant book lets us into one of the secrets of their success - how to use rigorous analysis to separate fact from fake. It's a skill that can help us all to make better choices in our lives' -- Peter Ricketts, former British National Security Adviser 'A rare insight into the methods and mindset of modern intelligence, written by a former top professional. A most valuable work' -- Lionel Barber, author of <i>The Powerful and the Damned</i> 'David Omand has more experience of the intelligence agencies and how they operate than anyone else in Britain. He also has the rare ability to explain spycraft and how raw intelligence is analysed without the use of jargon which would be incomprehensible to most readers. I have been waiting for a book like this for years' -- Sir Malcolm Rifkind 'Sir David Omand is undoubtedly one of the most able people to have served in British government since the Second World War' * TLS * 'David Omand has a unique combination of experience as both a producer and consumer of secret intelligence, a deep knowledge of intelligence history and techniques, and a gift for lucid exposition. An invaluable book for anyone who wants to think like a spy but also for those concerned about the role spies can play in a democracy' -- Lawrence Freedman, author of <i>The Future of War</i> 'This is nothing less than the new manual for analytical thought. What does it take to think clearly and maintain an open mind in the face of confusion? David Omand's book on How Spies Think prepares us for the the

David Omand was the first UK Security and Intelligence Coordinator, responsible to the Prime Minister for the professional health of the intelligence community, national counter-terrorism strategy and "homeland security". He served for seven years on the Joint Intelligence Committee. He was Permanent Secretary of the Home Office from 1997 to 2000, and before that Director of GCHQ.