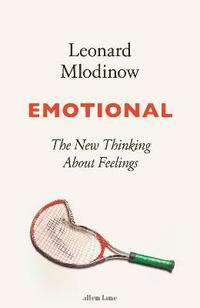 The New Thinking About Feelings

av Leonard Mlodinow
Inbunden Engelska, 2022-01-04
234
Köp
Spara som favorit
Finns även som
Visa alla 4 format & utgåvor
'Both a brilliant scholar and a great writer, Leonard Mlodinow guides us through the fascinating science of what we feel, and why - and what we can do about it. I learned a lot from this wonderful book: a masterpiece of clarity, helpfulness, and heart' Rick Hanson We've been told we need to master our emotions and think rationally to succeed. But cutting-edge science shows that feelings are every bit as important to our success as thinking. You make hundreds of decisions every day, from what to eat for breakfast to how to influence people, and not one of them could be made without the essential component of emotion. It has long been held that thinking and feeling are separate and opposing forces in our behaviour. But as best-selling author Leonard Mlodinow tells us, extraordinary advances in psychology and neuroscience have proven that emotions are as critical to our well-being as thinking. How can you connect better with others? How can you improve your relationship to frustration, fear, and anxiety? What can you do to live a happier life? The answers lie in understanding emotions. Taking us on a journey from the labs of pioneering scientists to real-world scenarios that have flirted with disaster, Mlodinow shows us how our emotions help, why they sometimes hurt, and what we can make of the difference. Cutting-edge research and deep insights into our evolution, biology, and neuroscience promise to help us understand our emotions better and maximize their benefits. Told with characteristic clarity and fascinating stories, Mlodinow's exploration of the new science of feelings is an essential guide to making the most of one of nature's greatest gifts to us.
Visa hela texten

This exploration of the interplay of emotion and thought is fascinating. I marvel at the skill that enables Mlodinow to crunch so much information in a compelling way. Emotional shows that rather than being counterproductive, emotions enrich our lives and understanding them better equips us to realise "what it means to be humans" * Financial Times * Those interested in understanding how feelings unconsciously steer thought are in for a stimulating read. Mlodinow handles this topic astutely with compelling examples and attention to the latest research, which is quite spectacular. He writes in a brisk, friendly style that easily draws you in and makes you reflect on both the recounted anecdotes and your own way of handling comparable situations -- Frans de Waal * New York Times * Mlodinow successfully shows how emotions can be assessed, regulated, and controlled, and powerfully concludes that understanding them is a lifelong project that's 'not just a science but an art.' This is a must-read for fans of Daniel Kahneman * Publishers Weekly * The American physicist and bestselling author Leonard Mlodinow popularises the findings from neuroscience over the past 50 years. . . he shows, through reports of psychologists' experiments and a series of quizzes, that recognising how much we are motivated by emotions allows us to be more thoughtful and present, more rational -- Susie Orbach * Observer * Both a brilliant scholar and a great writer, Leonard Mlodinow guides us through the fascinating science of what we feel, and why - and what we can do about it. I learned a lot from this wonderful book: a masterpiece of clarity, helpfulness, and heart -- Rick Hanson, author of Buddha's Brain Mlodinow - a gifted science writer - has produced another gem. Emotional is a captivating narrative that plunges you straight into the heart of a major scientific drama - the more than a century-old battle over the nature of emotions. No matter which side you find yourself on, you will relish this adventure to the front lines of scientific discovery -- Lisa Feldman Barrett, author of Seven and a Half Lessons About the Brain An absorbing deep dive into the new science of emotions that offers shrewd insights into the relationship between thinking and emotion. Mlodinow brings this important subject to life in a fascinating and informative way -- Susan David, author of Emotional Agility A captivating exploration of the science of emotions. Beautifully written and full of cutting-edge research, it is a crucial reminder of the power feelings have in our thinking -- Charles Duhigg, author of The Power of Habit Rationality, reason and logic have been heralded as the foundation of a clear mind, but Mlodinow, a physicist, argues that taking our feelings into account can help us make better decisions. He offers plenty of real-world examples, including his parents' experiences as Holocaust survivors * New York Times * An illuminating read that deals well with the complexity of emotion, the emerging science behind it and the fascinating workings of the brain itself. It might just help you remain calm and collected, even on a bad day * New Scientist * Leonard Mlodinow offers a crash course in emotions, one that feels less like cramming than like a colorful tour of the behavior of humans-and the rest of the animal kingdom. Most of this smart, trim volume is about the science of emotion rather than how to use it, but he doesn't miss the opportunity to dole out advice and provide opportunities for self-reflection * Wall Street Journal *

Leonard Mlodinow is the best selling author of The Drunkard's Walk, Subliminal and Elastic. He co-authored two books with Stephen Hawking and later wrote an acclaimed memoir, Stephen Hawking, about their time together. He has written for television, including multiple episodes of Star Trek: The Next Generation, as well as helping Steven Spielberg and Robin Williams make a video game. There are now over one million copies of Leonard Mlodinow's books in print.