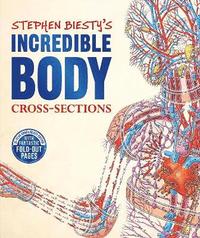 av Richard Platt
Inbunden Engelska, 2020-08-06
6-9 år
149
Köp
Spara som favorit
Skickas inom 5-8 vardagar.
Gratis frakt inom Sverige över 159 kr för privatpersoner.
Finns även som
Visa alla 3 format & utgåvor
How does the body protect itself from infections? What makes your tummy rumble? Are you taller at the beginning or end of the day? This extraordinary book actually takes you inside - and around - the human body to see how it works, with the help of some truly unique illustrations and some very small people! Explore your brain, your bones, and everything in between in incredible cross-section drawings of all the body systems. Inside each one are teams of tiny characters busy at work, and explaining what's going on. Every page is packed with jaw-dropping facts. Did you know that the skin is your largest organ - in an adult it's 2 sq m (22 sq ft). Have you ever thought about how heavy the brain is? Well, it's about 1.4 kg (3 lb) and is crammed with 100 billion nerve cells that help you think and move. And by the time you turn 75, your heart will have pumped blood around your body 4,000 million times! With the challenge of finding two tiny explorers making their way through the body, learning about anatomy has never been so much fun!
Visa hela texten

Illustrator Stephen Biesty made his name with the Incredible Cross-Sections series, which have topped sales of more than 3.5 million globally and have been translated into 16 languages. He has won many prizes, including the New York Times Best Illustrated Book Award. Richard Platt has published more than 100 books, 32 of which were for DK. He has won several prizes, including a Blue Peter award.