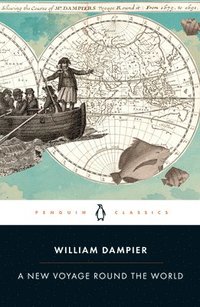 A New Voyage Round the World

av William Dampier, Nicholas Thomas
Häftad Engelska, 2020-08-27
138
Köp
Spara som favorit
Finns även som
Visa alla 8 format & utgåvor
'A roaring tale ... remains as vivid and exciting today as it was on publication in 1697' Guardian The pirate and adventurer William Dampier circumnavigated the globe three times, and took notes wherever he went. This is his frank, vivid account of his buccaneering sea voyages around the world, from the Caribbean to the Pacific and East Indies. Filled with accounts of raids, escapes, wrecks and storms, it also contains precise observations of people, places, animals and food (including the first English accounts of guacamole, mango chutney and chopsticks). A bestseller on publication, this unique record of the colonial age influenced Robinson Crusoe, Gulliver's Travels and consequently the whole of English literature. Edited with an Introduction by Nicholas Thomas
Visa hela texten

William Dampier (c.1651-1715) was a pirate and adventurer who was (albeit for chaotic and unintended reasons) the first man to voyage round the world three times. A New Voyage Round the World (1697), written from notes kept during his first voyage, was a literary sensation (inspiring Gulliver's Travels) and the model for all the great British naturalists and explorers of the eighteenth and nineteenth centuries. Nicholas Thomas has been Director of the Museum of Archaeology and Anthropology, Cambridge since 2006. He has worked in archives and collections in Europe, North America, New Zealand and the Pacific. His books include Discoveries: The Voyages of Captain Cook (2003), and Islanders: the Pacific in the Age of Empire (2010), which was awarded the Wolfson History Prize.