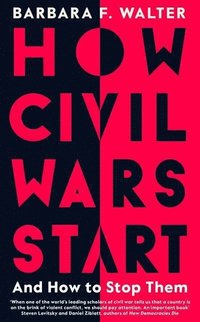 And How to Stop Them

Most of us don't know it, but we are living in the world's greatest era of civil wars. While violence has declined worldwide, civil wars have increased. This is a new phenomenon. With the exception of a handful of cases - the American and English civil wars, the French Revolution - historically it has been rare for people to organise and fight their governments.

This has changed. Since 1946, over 250 armed conflicts have broken out around the world, a number that continues to rise. Major civil wars are now being fought in countries including Iraq, Syria and Libya. Smaller civil wars are being fought in Ukraine, India, and Malaysia. Even countries we thought could never experience another civil war - such as the USA, Sweden and Ireland - are showing signs of unrest.

In How Civil Wars Start, acclaimed expert Barbara F. Walter, who has advised on political violence everywhere from the CIA to the U.S. Senate to the United Nations, explains the rise of civil war and the conditions that create it. As democracies across the world backslide and citizens become more polarised, civil wars will become even more widespread and last longer than they have in the past. This urgent and important book shows us a path back toward peace.
Visa hela texten