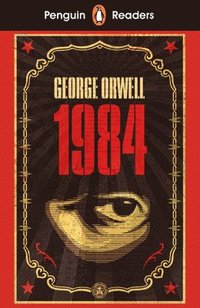 av George Orwell
Häftad Engelska, 2020-05-14
80
Köp
Spara som favorit
Kan levereras innan julafton!
Finns även som
Visa alla 1 format & utgåvor
Penguin Readers is an ELT graded reader series for learners of English as a foreign language. With carefully adapted text, new illustrations and language learning exercises, the print edition also includes instructions to access supporting material online. Titles include popular classics, exciting contemporary fiction, and thought-provoking non-fiction, introducing language learners to bestselling authors and compelling content. The eight levels of Penguin Readers follow the Common European Framework of Reference for language learning (CEFR). Exercises at the back of each Reader help language learners to practise grammar, vocabulary, and key exam skills. Before, during and after-reading questions test readers' story comprehension and develop vocabulary. Visit the Penguin Readers website Exclusively with the print edition, readers can unlock online resources including a digital book, audio edition, lesson plans and answer keys. Winston Smith re-writes history for the Ministry of Truth in Oceania. Big Brother and the Thought Police watch everyone for signs of Thought Crime. But when Winston falls in love with Julia, he begins to have new ideas and hopes. Winston and Julia start to question the world that they live in - but Big Brother does not like independent thought.
Visa hela texten

George Orwell (Author) Eric Arthur Blair (1903-1950), better known by his pen-name, George Orwell, was born in India, where his father worked for the Civil Service. An author and journalist, Orwell was one of the most prominent and influential figures in twentieth-century literature. His unique political allegory Animal Farm was published in 1945, and it was this novel, together with the dystopia of Nineteen Eighty-Four (1949), which brought him world-wide fame. His novels and non-fiction include Burmese Days, Down and Out in Paris and London, The Road to Wigan Pier and Homage to Catalonia. Ladybird (Author) We make growing up the best story ever! Here at Ladybird, we publish playful books for little hands. From touch-and-feel books to bedtime stories and non-fiction, we help 0-7s to learn, play and grow - sparking plenty of smiles along the way. The home of Ten Minutes to Bed, Baby Touch, Peppa Pig and Hey Duggee, we know just how to capture curious little imaginations and guide them from one story to the next.