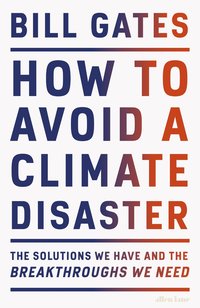 How to Avoid a Climate Disaster

The Solutions We Have and the Breakthroughs We Need

av Bill Gates
Inbunden Engelska, 2021-02-16
189
Köp
Spara som favorit
Skickas inom 5-8 vardagar.
Gratis frakt inom Sverige över 159 kr för privatpersoner.
Finns även som
Visa alla 2 format & utgåvor
In this urgent, authoritative book, Bill Gates sets out a wide-ranging, practical - and accessible - plan for how the world can get to zero greenhouse gas emissions in time to avoid a climate catastrophe. Bill Gates has spent a decade investigating the causes and effects of climate change. With the help of experts in the fields of physics, chemistry, biology, engineering, political science, and finance, he has focused on what must be done in order to stop the planet's slide toward certain environmental disaster. In this book, he not only explains why we need to work toward net-zero emissions of greenhouse gases, but also details what we need to do to achieve this profoundly important goal. He gives us a clear-eyed description of the challenges we face. Drawing on his understanding of innovation and what it takes to get new ideas into the market, he describes the areas in which technology is already helping to reduce emissions, where and how the current technology can be made to function more effectively, where breakthrough technologies are needed, and who is working on these essential innovations. Finally, he lays out a concrete, practical plan for achieving the goal of zero emissions-suggesting not only policies that governments should adopt, but what we as individuals can do to keep our government, our employers, and ourselves accountable in this crucial enterprise. As Bill Gates makes clear, achieving zero emissions will not be simple or easy to do, but if we follow the plan he sets out here, it is a goal firmly within our reach.
Visa hela texten

Gates' book is compulsively readable. His ambition was to 'cut through the noise' and give consumers better tools for understanding what works, an ambition he meets admirably. It more than that, however. Gates can get an audience with anyone, can marshal almost limitless resources, and is dogged in the detail. The result - particularly in the wake of the Trump presidency - is thrilling -- Emma Brockes * The Guardian * Of the many books I have come across recently making the case that climate change will be a catastrophe, but we can do something about it, this is the best ... The relentless practicality of the book combined with Gates's firm faith in innovation do not promote despair. He exudes optimism; things will get better, not least because, as John Lennon once sang, they can't get no worse -- Bryan Appleyard * Sunday Times * It is mostly concerned with solutions rather than problems. This already marks it out as something of an outlier within environmental literature... if you're after an approachable book about what needs to happen next, this is a great place to start -- Ed Conway * The Times * Bold but well argued ... a compelling explanation of how the world can stop global warming by reducing greenhouse gas emissions effectively to zero... [Gates] is a serious and genuine force for good on climate change -- Bob Ward * Observer * How to Avoid a Climate Disaster is clear, concise on a colossal subject, and intelligently holistic in its approach to the problem. -- Adam Vaughan * New Scientist * It all makes for a meaty manifesto which Gates hopes can offer sufficient variety to appeal across political divides and "shift the conversation" away from the polarisation and misinformation that has clouded discussion about climate change up until now. -- Martin Bentham * Evening Standard * Gates's carefully packaged nuggets of information are not only easy to understand, but they aim to provide the reader with practical tools to engage with the density of climate change information ... What Gates has achieved with his book is something rare in the swelling arena of popular climate literature. The Microsoft co-founder turned philanthropist has compiled a solutions-based strategy that is as informed on the commercial realities of scaling new technologies as it is on the environmental consequences of not doing so. -- Daniel Murray * The Business Post * The most refreshing aspect of this book is its bracing mix of cold-eyed realism and number-crunched optimism ... Ultimately [Gates's] book is a primer on how to reorganise the global economy so that innovation focuses on the world's gravest problems. It is a powerful reminder that if mankind is to get serious about tackling them, it must do more to harness the one natural resource available in infinite quantity-human ingenuity. * Economist *

Bill Gates is a technologist, business leader, and philanthropist. In 1975, he cofounded Microsoft with his childhood friend Paul Allen; today he and his wife, Melinda, are cochairs of the Bill & Melinda Gates Foundation. He also launched Breakthrough Energy, an effort to commercialize clean energy and other climate-related technologies. He and Melinda have three children and live in Medina, Washington.