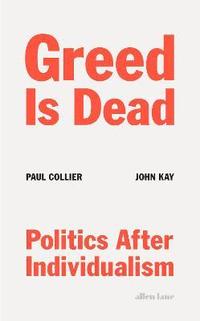 av Paul Collier, John Kay
Inbunden Engelska, 2020-07-30
172
Köp
Spara som favorit
Skickas inom 5-8 vardagar.
Gratis frakt inom Sverige över 159 kr för privatpersoner.
Finns även som
Visa alla 3 format & utgåvor
Two of the UK's leading economists call for an end to extreme individualism as the engine of prosperity Throughout history, successful societies have created institutions which channel both competition and co-operation to achieve complex goals of general benefit. These institutions make the difference between societies that thrive and those paralyzed by discord, the difference between prosperous and poor economies. Such societies are pluralist but their pluralism is disciplined. Successful societies are also rare and fragile. We could not have built modernity without the exceptional competitive and co-operative instincts of humans, but in recent decades the balance between these instincts has become dangerously skewed: mutuality has been undermined by an extreme individualism which has weakened co-operation and polarized our politics. Collier and Kay show how a reaffirmation of the values of mutuality could refresh and restore politics, business and the environments in which people live. Politics could reverse the moves to extremism and tribalism; businesses could replace the greed that has degraded corporate culture; the communities and decaying places that are home to many could overcome despondency and again be prosperous and purposeful. As the world emerges from an unprecedented crisis we have the chance to examine society afresh and build a politics beyond individualism.
Visa hela texten

this thoughtful polemic... is clear, punchy and... convincing... their breezy, no-nonsense guide is packed with excellent advice - a plea for expertise rather than feeling, for pragmatism rather than ideology and for listening rather than shouting. -- Christina Patterson * Sunday Times * Two of the most thoughtful economists writing today ... Collier and Kay are interesting on almost every subject they alight upon. -- Richard Reeves * Literary Review * Written by two of the UK's best economists, the book attacks the solipsistic individualism that permeates modern economics and far too much of modern society. The book's animating idea is that humans are first and foremost social animals. Our successes always depend on co-operation. The authors apply this concept to our economic, social and political institutions, which can, they argue, only be revived by being seen as self-sustaining communities. -- Martin Wolf * Financial Times Books of the Year * Their analysis is pitiless and compelling. This is a fine, incisive polemic. -- Clement Knox * Telegraph * In a provocative but thought-provoking and nuanced argument, Collier and Kay argue that our culture of hyper-centralisation is choking us. -- Books of the Year * Daily Telegraph *

Paul Collier (Author) Paul Collier is the Professor of Economics and Public Policy at the Oxford Blavatnik School of Government. He is the author of The Future of Capitalism, which won the 2019 Handelsblatt Prize; The Bottom Billion, which won the Lionel Gelber Prize and Arthur Ross Prize of the Council on Foreign Relations; The Plundered Planet, Exodus and Refuge (with Alexander Betts). Collier has served as Director of the Research Department of the World Bank, and works with governments around the world. John Kay (Author) John Kay is one of Britain's leading economists and a fellow of St John's College Oxford. His career has spanned academia, business, finance and public policy. He was the founding head of the Oxford Said Business School and the Institute for Fiscal Studies - Britain's most respected think tank. He is the author of The Truth About Markets, Obliquity, Other People's Money and other books and for twenty years contributed a regular column to the Financial Times.