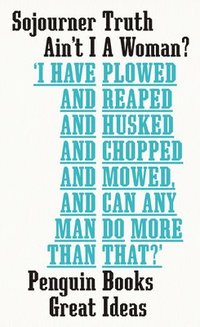 av Sojourner Truth
Häftad Engelska, 2020-09-24
84
Köp
Spara som favorit
Finns även som
Visa alla 1 format & utgåvor
'I am a woman's rights. I have plowed and reaped and husked and chopped and mowed, and can any man do more than that? I am as strong as any man that is now' A former slave and one of the most powerful orators of her time, Sojourner Truth fought for the equal rights of Black women throughout her life. This selection of her impassioned speeches is accompanied by the words of other inspiring African-American female campaigners from the nineteenth century. One of twenty new books in the bestselling Penguin Great Ideas series. This new selection showcases a diverse list of thinkers who have helped shape our world today, from anarchists to stoics, feminists to prophets, satirists to Zen Buddhists.
Visa hela texten

Sojourner Truth (c.1797 - 1883) was born into slavery in New York State. In 1826, she escaped with her young daughter, leaving two of her other children behind. When her son was later illegally sold to a slave owner in Alabama she sued for his return, becoming one of the first black women to successfully challenge a white man in an American court. She spent the rest of her life campaigning for abolition, equal rights and universal suffrage, and found fame as a reformer and public speaker. Her memoir, The Narrative of Sojourner Truth, is published in Penguin Classics.