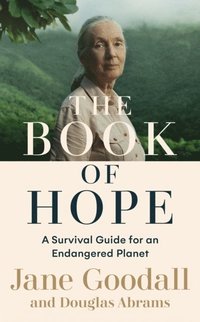 The Book of Hope

A Survival Guide for an Endangered Planet

av Jane Goodall, Douglas Abrams
Inbunden Engelska, 2021-10-21
199
Köp
Spara som favorit
Finns även som
Visa alla 3 format & utgåvor
A NEW SCIENTIST BOOK OF THE YEAR 'A true hero' Greta Thunberg A legendary conservationist. A lifetime spent fighting for nature. An indispensable message of hope. The world-renowned naturalist and conservationist Jane Goodall has spent more than a half-century warning of our impact on our planet. From her famous encounters with chimpanzees in the forests of Gombe as a young woman to her tireless campaigning for the environment in her late eighties, Jane has become the godmother to a new generation of climate activists. In The Book of Hope, Jane draws on the wisdom of a lifetime dedicated to nature to teach us how to find strength in the face of the climate crisis, and explains why she still has hope for the natural world and for humanity. In extraordinary conversations with her co-author Doug Abrams that weave together stories from her travels and activism, she offers readers a new understanding of the crisis we face and a compelling path forward for us all to create hope in our own lives and in the world. The world needs a manifesto of hope now more than ever. This profound book from a legendary figure in the fight against climate change shows that even in the face of great adversity, we can find hope in human nature, and in nature itself.
Visa hela texten

'A true hero' -- Greta Thunberg 'One of the most impactful and important leaders on the planet. Jane spends nearly every day spreading optimism and raising awareness worldwide; hers is a powerful message to protect the inherent rights of every living creature, to provide hope for future generations and to sound an urgent call against the greatest environmental threat of all-climate change' -- Leonardo DiCaprio 'A lifetime of experience and wisdom combines with much-needed optimism in this guide to the climate crisis and what we can do about it' * Guardian * 'Goodall's tales are undeniably uplifting, as is her life story' * Financial Times * 'I don't feel there could have been a more timely moment for this book to be coming into our lives... it's the book we've been waiting for. It's the book we've been hoping for' -- Jay Shetty, author of Think Like a Monk 'Illuminating... teases out Goodall's thoughts on why one should feel hopeful in "dark times." In unpacking her belief in the power of persistence, Goodall takes readers to her childhood home in England, where her family questioned if she had the constitution to travel to Africa; to Tanzania, where she studied chimpanzees and came face to face with "crippling poverty, lack of good education and degradation of the land"; and into her work as a U.N. Messenger of Peace. Her infectious optimism and stirring call to action make this necessary reading for those concerned about the planet's future. Goodall's rousing testament will resonate widely' * Publisher's Weekly (Starred Review) * 'At 87, the world-renowned naturalist and conservationist remains a doughty campaigner who has inspired Greta Thunberg and countless others. Now she draws on the wisdom of a lifetime dedicated to nature to explain why she still has hope for the natural world and humanity. In a series of enthralling conversations with her co-author Abrams, she weaves together stories from her travels and activism to offer a manifesto of hope - which shows that even in our current state of adversity, we can still take inspiration from nature' * Bookseller * 'Hers is no rose-tinted vision, but a lucidly argued conviction that hope is a human survival trait' * Financial Times * 'Both a memoir of a well-lived life and a compendium of stories of 'people who succeed because they won't give up'' * New Scientist *

Dr Jane Goodall, founder of the Jane Goodall Institute & UN Messenger of Peace, was born in the UK. In July 1960 at the age of 26 she travelled to what is now Tanzania, and ventured into the forests of Gombe and the world of wild chimpanzees. Equipped with little more than a notebook, binoculars, and her fascination with wildlife, Dr Goodall braved a realm of unknowns to give the world a remarkable window into the lives of humankind's closest living relatives. From those early days in the remote forests of Gombe, to the lecture halls of Cambridge (where she earned a PhD in ethology with no prior degree) and Stanford (as a visiting professor in human biology), through 60 years of ground-breaking research, Dr Goodall has become one of the most recognised living scientists in the world. Douglas Abrams is an author, editor and literary agent. In addition to co-writing The Book of Joy with the Dalai Lama and Desmond Tutu, he has had the privilege of working with other Nobel Laureates including Nelson Mandela, Jody Williams, and Elizabeth Blackburn. He has worked with many visionary scientists including Professor Stephen Hawking.