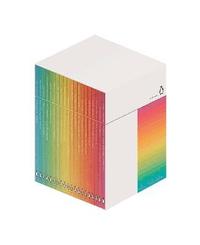 av Greta Thunberg, Robin Wall Kimmerer, Naomi Klein, Timothy Morton, George Monbiot
Mixed media product Engelska, 2021-10-21
919
Köp
Spara som favorit
In twenty short books, Penguin brings you the classics of the environmental movement - now in one complete set Over the past 75 years, a new canon has emerged. As humans have driven the living planet to the brink of collapse, visionary thinkers around the world have raised their voices to defend it. Their words have endured, becoming the classics that define the environmental movement today. From art, literature, food and gardening, to technology, economics, politics and ethics, each of these short books deepens our sense of our place in nature; each is a seed from which a bold activism can grow. Together, they show the richness of environmental thought, and point the way to a fairer, saner, greener world.
Visa hela texten

Greta Thunberg (Author) Greta Thunberg was born in 2003. In August 2018, she started a school strike for the climate outside the Swedish Parliament that has since spread all over the world and now involves over 1 million schoolchildren. The movement is now called Fridays For Future. Thunberg has spoken at climate rallies across Europe. In December she attended the United Nations COP24 in Katowice, Poland, where she addressed the Secretary-General and made a speech that was shared many million times around the globe. In January 2019 she was invited to the World Economic Forum in Davos where her speeches again made a worldwide impact. She has won the prestigious Prix Liberte and been nominated for a Nobel Peace Prize. Thunberg is vegan, and doesn't fly, in order to live a low-carbon life. Naomi Klein (Author) Naomi Klein is an award-winning journalist, syndicated columnist and author of the international bestsellers No Logo, The Shock Doctrine, This Changes Everything: Capitalism vs the Climate, and No Is Not Enough: Defeating the New Shock Politics. In 2017 she joined The Intercept as Senior Correspondent. Recent articles have also appeared in the Guardian, The Nation, The New York Times, the New Yorker and Le Monde. In November 2016 she was awarded the Sydney Peace Prize in Australia. Timothy Morton (Author) Timothy Morton is Rita Shea Guffey Chair in English at Rice University. They have collaborated with Bjoerk, Laurie Anderson, Jennifer Walshe, Hrafnhildur Arnadottir, Sabrina Scott, Adam McKay, Jeff Bridges, Justin Guariglia, Olafur Eliasson, and Pharrell Williams. Morton co-wrote and appears in Living in the Future's Past, a 2018 film about global warming with Jeff Bridges. They are the author of the libretto for the opera Time Time Time by Jennifer Walshe. Morton has written Being Ecological (Penguin, 2018), Humankind: Solidarity with Nonhuman People (Verso, 2017), Dark Ecology: For a Logic of Future Coexistence (Columbia, 2016), Nothing: Three Inquiries in Buddhism (Chicago, 2015), Hyperobjects: Philosophy and Ecology after the End of the World (Minnesota, 2013), 11 other books and 250 essays on philosophy, ecology, literature, music, art, architecture, design and food. Morton's work has been translated into 10 languages. In 2014 they gave the Wellek Lectures in Theory. George Monbiot (Author) George Monbiot studied zoology at Oxford, and has spent his career as a journalist and environmentalist, working with others to defend the natural world he loves. His celebrated Guardian columns are syndicated all over the world. He is the author of the bestselling books Captive State, The Age of Consent, Bring on the Apocalypse and Heat, as well as the investigative travel books Poisoned Arrows, Amazon Watershed and No Man's Land. His latest book, Feral, was shortlisted for the Great Outdoors Book of the Year award. Among the many prizes he has won is the UN Global 500 award for outstanding environmental achievement, presented to him by Nelson Mandela. Bill McKibben (Author) Bill McKibben is a writer and environmental activist. His The End of Nature (1989) is considered the first book for a general audience about climate change. He serves as the Schumann Distinguished Scholar in Environmental Studies at Middlebury College, as a fellow of the American Academy of Arts and Sciences, and he has won the Gandhi Peace Prize. He has campaigned on every continent, including Antarctica, for climate action. In recognition of his activism, a new species of woodland gnat - Megophthalmidia mckibbeni - was in 2014 named in his honour. Amitav Ghosh (Author) Amitav Ghosh is an award-winning novelist and essayist. His most recent book is The Great Derangement Tim Flannery (Author) Professor Tim Flannery is a palaeontologist and conservationist who frequently presents programmes on ABC Radio, NPR and the BBC. He is a leading writer on climate change and his previous books include Here on Earth (2010) and The Weather Makers (200